Today was unreal.  I woke up this morning to watch the sunrise from the balcony of my hotel room which happens to be on a beautiful marina.  After getting ready for my day I walked to an adorable restaurant called “Green Beans”, it was absolutely amazing.  I wasn’t sure at all what to expect out of Turks and Caicos, but the reality of it is much different than my initial thoughts.  I pictured a ton of tourists and the restaurants to be pretty busy, but I have hardly seen anyone.  I enjoyed my breakfast on an outdoor patio and I was the only one there for the duration of my meal.  I ordered a coffee (grown locally) as well as an egg white omlette with cheese, mushrooms, avocado, and turkey.  It was amazing despite the high prices seen everywhere on the island.  Next, I took a taxi to the main beach on the island, known as Grace Bay.  The water was unlike anything I have ever seen: crystal clear and super turquoise.  I probably walked six miles today with plenty of swim breaks, and I was on a mission to find a reef to snorkel.  After asking around (everyone so far has gone out of their way to help me) I was lead to a perfect spot, known as Bight Reef.  I found an eagle ray, a huge barracuda, a flounder, and some beautiful coral.  The sea life is so different than other places I have visited. The water is so clear and the array of soft coral is breathtaking.  I definitely enjoyed myself. 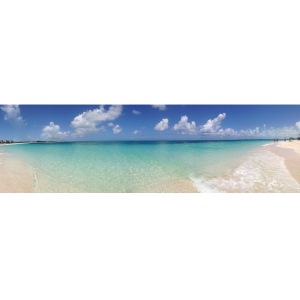 Another interesting part of my day involved a friend I made on my walk to the reef.  He called himself “Smiley Face” and was very entertaining.  We went to a bar on the beach called “Somewhere” and enjoyed some drinks.  Now… I am traveling alone and I’m super paranoid of my safety, so I was a little uncertain about this bar.  We were the only ones sitting out on the balcony and I convinced myself I was going to get roofied or some sort of awful thing was going to happen to me.  Turns out I am just a light weight because I have hardly drank this summer, and I got tipsy off just a few beers.  We then walked along a beach where he showed me a craft sale/market and then we took a “taxi” to a lunch spot near my hotel. Now this taxi was just some random local guy’s car, which is pretty typical of taxis here.  I thought I was going to die, as the driving was pretty crazy and they also drive on the left side, which I am just not accustomed to at all.   At this point I just wanted to be alone and go snorkeling some more at the reef near my hotel, so I dropped some hints that I had plans and eventually he waved down a car and went back to work on Grace Bay,  It was nice to have a little company and some free drinks/taxi ride/lunch!

Another thing I have to mention is every time I am on any sort of road, 9 out of 10 cars beep at me.  I have no idea if they are saying “hello” or if they are one of those illegal taxi services looking for someone to drive.  Either way I am so awkward about it and don’t know if I should smile or wave so I usually make some sort of weird gesture and continue walking.  Sorry about all these random thoughts but I have had a busy last few days and I look forward to horseback riding tomorrow as well as traveling to South Caicos and meeting the students I’ll be spending the next semester with!