A busy first day on the Big Island

Aloha everyone! I have so much to write about, but so little time. The past month has been pretty crazy. I’ve been participating in the Smithsonian MarineGeo biodiversity assessment. I’ll try to write a whole separate post about work excitement. But first is the trip I’m on right now on the beautiful Big Island of Hawaii. From June 8-10th I am participating in the Hawaii Environmental education symposium at the Volcanoes National Park. But I decided to make the most out of this opportunity and turn it in to more of an adventure/dive trip. I left on Saturday morning, June 3rd, it has only four days here and I feel like I’ve done so much!

To start, I’ll go into some details about planning. I knew I really wanted to scuba dive in Kona, which is a very pricey hobby, so I knew I’d have to spend most of the travel budget on these amazing dives. I also knew I wanted to rent a car. When I visited Hilo a few months back for a NOAA workshop, I didn’t have a rental car and it was a struggle. Especially because I love to adventure and constantly be independent and get around on my own. So I started looking into rental cars. I was fortunate enough to come across a listing on Craigslist about a used car dealer who rents out their are! The reason this was so appealing to me was that all car rental places in the airport charge very high rates. Not only that but for all drivers under 25 years old there’s a ridiculous fee that can be up to an additional $40-$45/ day which is absurd. So through Aiona used car dealership my total cost came out to be $40/day and has been so worth it! I have considered it not only a car, but a storage locker, hotel, kitchen, and AC unit all in one!

So day 1 I arrived at the kona airport at around 8 where a kind lady from Aiona car sales came and adropped off the car! It’s a super cute white Ford Fiesta. I started heading south knowing I wanted to do the hike to the green sand beach. After driving about five minutes I passed a Walmart and decided to stock up on food for the rent if the week. I got the essentials: carrots and hummus, granola bars (Lara bars!), bread, peanut butter and jelly, crackers, and a few gallons of water and ice. The total trip only took about 10 minutes and I’m still living off pb and j every day. Back to the road I went and continued south. Fortunately for me I brought my GPS and also car charger that fits 5 USBs (this was a life saver). I got lost once but realized pretty fast and just turned around. The route was essentially straight south with no turns so I don’t even know how it’s possible for me to get lost, but look at me, I’m an overachiever!

The ride itself was pretty chill. Passed by all the famous Kona Coffee farms which is always fun to see. The highway is a simple one lane swurvy highway, pretty different than Oahu. After about 2 hours give or take i made it by 11:00. I quickly threw together a gourmet PB and J using my awesome sustainable bamboo flatware from Down to Earth on Oahu (just $1!). Anyways, the turn onto South Pointe road is pretty easy to miss, but once you get there it’s a narrow rad about 11 miles to the parking lot. At the hike trailhead, locals were offering shuttles in their trucks to get to the Green Sand Beach, but me being super cheap decided to walk it. I think the hikes only 2.5 miles each way, but with the wind it really did feel longer than that. The trail is right along the coast, so the views were pretty good, after an hourish I made it too the green sand beach. The color of the sand is due to the mineral, olivine. This beach, called Papakolea Beach is one of only four green sand beaches in the world! Olivine is a common mineral component of Hawaiian volcanoes and one of the first crystals to form when magna cools. Geology is low key super cool and super relevant here on Big Island. Anyways, the climb down to the beach is a bit precarious but totally worth it. Apparently I went down the very wrong way (but shorter way,) but apparently if you continue to the middle of the bay there’s a latter and path to safely follow down to the beach. The waves were a bit too intimidating for me, but I enjoyed the view, the steep walls are amazing!

By the time I finished the hike it was around 2:30 I think. My next stop was a five minute drive to an area called “South Point”. This is the southern most point of all United States. Many believe that it’s in the Florida keys, but no that is wrong it’s a Hawaii! This whole coastline is super beautiful, and the lava cliffs drop off about forty feet into the sea. There were some cliff jumpers there, and after seeing his clear and inviting the ocean looked, of course I had to take a leap. When else would I have the chance to jump off of the “end of the world”. It was a pretty long way with a somewhat sketchy climb back up on a metal ladder, but no regrets I brought my mask and snorkel to check out the water and boy was it clear! Super beautiful I highly recommend.

But the adventures don’t end here, with plenty of sunshine left I continued along the highway and now headed north. My next stop was to Punaluu bakery, known to have the best sweetbread in Hawaii. I opted for a Lilikoi (passion fruit) glazed malasada. Sorry mom but I think this was the best baked good I’ve ever had. If that’s ever in stock when you pass by, 100% get it, maybe get a dozen! Alright anyways, continuing down the highway I reached my final stop, Punaluu beach. I’ve visited this beach but it’s amazing. The sand here is super black and there’s usually Hawaiian green sea turtles basking in the sun on the warm black sand. Luckily for me when I went there were about 7 turtles chilling. Super cool to see! Don’t miss this beach.

The ride straight back to Kona took two-hours, with a few pit stops for snacking and calling dive companies to make reservations (yay last minute booking-oops). By the time I made it back to Kona I was pretty ravenous, so with a quick google search of “vegan restaurants in Kona” I was lead to Ai Pono. This was seriously such a good decision, weather you eat meat or not seriously check this place out you won’t regret it. I asked the cashier what her favorite meal was, and she said the BBQ pulled jackfruit nachos. I trusted her opinion and went with it. Side note- I have never had jackfruit or even think that it sounded tasty, but boy was I in for a treat. It tasted better than any meat I’ve ever had (well I don’t like meat) but I’m telling you this stuff is to die for, I’m actually glad this isn’t on Oahu or I would probably go every single day. The whole menu looked amazing, a vegans paradise (and great for nonvegans too). I also loved the informational posters everywhere about the benefits for ones health as well as the environment when you adopt a plant based diet. NOM

My last stop of the day was to my campground located just south of Kona town called Kohanaiki Beach Park. This was seriously one of the nicest camp grounds I’ve seen in Hawaii. The spots were right on the beach and you could park your car right next to your site. You do need a permit, so I stayed for two nights and it was only $5/night. For me this was so worth it because not only were there pretty clean restrooms and showers, but there were 24 hour security guards and a locked gate at night. As soon as I pulled up the sun began to set and I was so overwhelmed with beauty. Not only that but I realized that I was standing on an amazing shelling beach. And I love shelling so I was so stoked. The sunrise was definitely one of the nicest ones I’ve seen- and I’ve seen a lot. I always thought Maui had the best sunsets, but Kona this week has been spectacular! 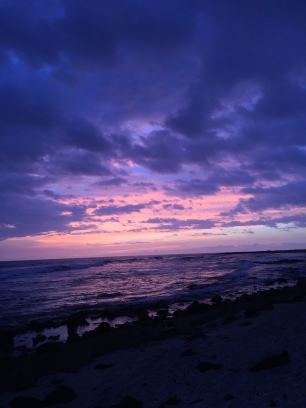 I set up a hammock in a tree, charged my GoPro phone and GPS in my car, and fell asleep at like 9. This was after shelling in the dark with a flashlight looking like a creep for a good hour. I was pretty exhausted and fell asleep right away, but was awakened by a light drizzle maybe a half hour later, which convinced me to sleep in my car. After half the night curled up in a ball in the back seat, I knew I needed to adjust so I headed to the passengers seat (aka my kitchen) put the seat all the way back and found out this was the comfiest spot in the car. I fell asleep promptly and stayed asleep until morning. More adventures to come, this was just day 1! Stay tuned and thanks for reading!