Unreal diving in Kona: day two on the Big Island

Thinking about all the things I have done and seen in the past week on the Big Island is a bit overwhelming, but it has been such an incredible experience I just have to share with you. I still haven’t even talked about day two on Big Island, so this takes us back to last Sunday. I woke up from my car where I “camped” on Kohanaiki Beach. I walked pretty far along the beach to view some anchialine pools and along the shore getting super distracted by some beautiful shells. At around 8:00 AM I went scuba diving through Kona Honu Divers. Well side note I originally tried going with another company (Neptune Charlie’s) but their boat broke down so they switched me. As we headed out of the harbor we passed a beautiful pod of dolphins that were playing in the boat’s wake. They are so mesmerizing I feel like I could watch them play all day. I watch them with awe and envy, wishing I could maneuver through the water as gracefully as them. After a few minutes, while we were still in the harbor, my dive master, Taka, pointed to the ocean and said “tiger!!” I looked over the bow of the boat and low and behold there was a massive beautiful tiger shark, probably around 13 feet long, chilling right at the surface of the water. It was unreal and just seeing this beauty made my heart light up with so much happiness. I discussed my passion for sharks with the crew who told me that tiger sharks are a pretty common occurrence right outside of the harbor. Super super cool the ocean creatures in Kona are sooo much cooler than Oahu, or at least it sounds like it.

The boat continued North for about 15 minutes, but when we got to the dive site they decided that the current would be a bit too strong. To my delight, Taka said we would go to the dive site that’s know for sharks, so clearly I was super stoked about this! The dive site was called Nai’a (Hawaiian for dolphin) and it was right near the harbor opening. There was a pretty big group on our boat, so we dove in three groups of 4 people. Fortunately my group was the first to enter the water, because I was getting overheated in my wetsuit in the scorching sun. I got in the water and descended to the bottom, where the first thing I saw was an eagle ray soaring by. Naturally, I swam towards in and followed it for a few minutes. I absolutely love their intricate patterns, and their graceful movement. They are definitely one of my favorite animals.
Next, we swam towards the middle of the channel. I would typically never think that a boat channel next to a harbor would have good diving, but boy was I mistaken. The visibility was amazing, like 100 ft+. The coral was also alive and beautiful, so much healthier than the coral I typically see on Oahu, so I enjoyed their vibrant colors. Also- there were SO MANY fish everywhere. Big fish, and tiny little ones, swimming around in a beautiful display of colors. It was my first dive ever on the Big Island, and I was already hooked!

Anyways, as we got to the middle of the harbor, clicking noises got louder and louder, and I looked above me and there was a huge pod of dolphins above us. I was tempted to meet them and kick towards the surface but I realized that that would be super dumb because I was in the middle of a channel with boats passing overhead. Fortunately for me, the dolphins were curious and came down to check us out! I’ve swam with dolphins loads of times (hard life I have I know) but this was the first time on scuba, and it was a very cool perspective to see them from underneath! Life is so wonderful. I really think that the ocean is such good therapy and can reset your mind in a second. As soon as I submerged all my problems go away and it’s just me and the glorious sea.

We continued wandering through the boat channel, when we came across a large lava boulder. My dive buddies were admiring a brightly colored nudibranch with a dive light, when I looked up and saw a massive shadow passing behind the rock. I quickly investigated and found out it was indeed a beautiful tiger shark!! I didn’t have an ounce of fear, I just followed the shark in hopes to have a good view. It didn’t seem too bothered by our presence, but it just continued to cruise on by. I was on cloud nine with excitement, this was my first tiger shark interaction caught on camera and life is so good and sharks are so amazing and I feel so blessed to live in such an incredible little island in the middle of the Pacific Ocean.

The rest of the dive I was just full of adrenaline and excitement. Underneath our dive boat was a huge school of goatfish, and I swam with them for a while. Not to brag but my air consumption is on point so I could just cruise for a while under the boat while everyone else had to end their dive. I stayed in for quite a while and even ended with like 1000 PSI.

The second dive of the day was at a site called Fish Bowl, named for its huge amount of fish. The water was super clear here too so it was awesome diving. My highlight was finding some beautiful cowrie shells (with no critters living inside). We also saw some honu (turtles). By the time my dive was over it was already around 1:30 and I had to check into my next flight by 2:30 PM so I went straight to Kona Diving Company to sign some forms. I choose this company because I met the owner and her daughter in law in the Philippines last October. They happened to be on the same flight as me to the Philippines, stayed at the same resort as us, and we even dove together! Crazy small world we live in. Anyways, HIGHLY recommend diving through Kona Diving Company, I would have booked every dive with them but they were already scheduled (cause they’re so amazing) I caught up with Katie for a bit at the shop, then realized the night dive ends at 10 PM and the campground gates close at 9 PM. I frantically called some hostels but everything was booked. Well, if all else fails I’ll sleep in my car in the Walmart parking lot I guess. But… as a last effort I returned to the campsite in search of the guards. I found one that I had met the day prior, and explained that I was doing a scuba dive that ended late. He told me “no worries sis, call when you get back and I’ll let you in, no worries” well, that was a lot easier than I expected. I took a quick beach walk to fill up my spare 20 minutes, made a quick PB sandwich, and was on my way back to the boat harbor.

I found my boat, got the briefing, quickly befriended everyone on the boat, and then we wet on our way. The crew was so funny and kind, I knew it was going to be a good evening. It was another 2-tank dive, this time heading north to a site called Eel Garden . In Kona, there two places that have a “campfire” of lights underwater to attract plankton, which in turn attract manta rays. Last time I was on Big Island I did the site near the Sheraton, which was beyond spectacular but unfortunately it was a zoo of people. Fortunately, there were only two other boats at Eel garden, so a lot more low key. Our first dive happened right before sunset, and went around the reef. I’m a huge sandy patch there were thousands of skinny little garden eels peeking up, and when you would swim close they would hide in their little holes, and peek their tiny heads up to see if we were still there. I haven’t seen these little dudes in a while, so I loved this dive site! We continued along and came across tons of moray eels, a frog fish, and just a huge assortment of fish once again. The coral wall was beautiful, dropping to depths of over 90 feet. And one thing cool about Kona Diving Company is that you dive until you have 800 PSI left. Everyone in our group ended at 60 minutes, but me and the dive master got a solid 90 minute dive in. When we surfaced he admitted that he was impressed with my air consumption, which made me feel pretty fab.

During our 1-hour surface interval we ate some dinner and then got a lovely briefing about manta rays. We learned that each manta has a unique belly spot pattern, and they all are named on an online database through MantaTrust. And if we every take a new photo of one, we get to name it! Pretty cool. I enjoyed that that talked a lot on conservation of the sharks and how they are fished in many parts of the world. They also warmed us that they hadn’t seen a manta in two weeks, but we’d wait by the campfire for 20 minutes and if nothing comes by we would just go for a cool reef night dive! 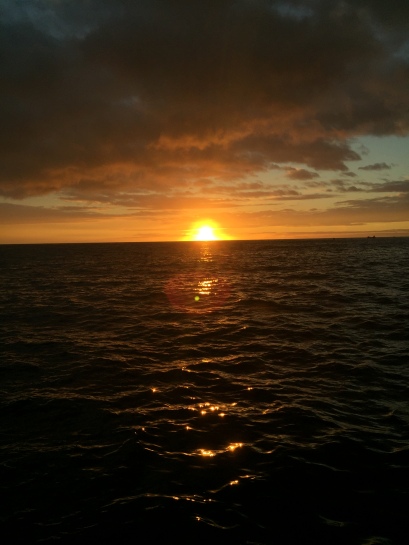 We got into the ocean after an incredible Kona sunset. The sky looked like it was on fire! The water was a bit cold, and made me pretty happy I was wearing a wetsuit. The campfire is beautiful to look at with or without mantas, because many of the fish are attracted to the light. There were tons and tons of aholehole (Hawaiian flagtail fish) and even huge Ulua (giant trevalli) that would use our lights to stun pray. But by some stroke of luck a huge majestic manta ray swooped in (right above me I might add) and chilled for like 20 minutes. It repetitively gulped up plankton for the campfire, then would follow a pattern of going out over my dive masters head next to me, and back over my head. Out of all the divers there, I was getting quite the show. Again I was just so full of joy and happiness to experience these amazing creatures. Life is so beautiful!! The night finished with me passing out in my car once again at my campsite (shoutout to the guard for Letting me in!), this time knowing that the passenger seat was the comfiest position I was going to get. But hey I slept right through the night. 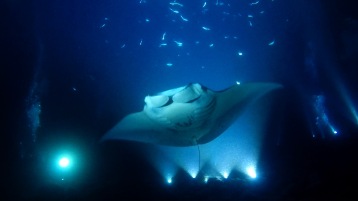