The next morning I woke up for sunrise and did a little more shelling on the beach. We had the entire beach to ourselves which was super nice. As I mentioned the weather was super humid so several times throughout the night I woke up in a giant pool of sweat, but hey that’s budget travel for you!

We headed on towards Muscat, en route to a coffee shop before the mosque. We wanted to grab some breakfast and wifi! The mosque was an incredible experience, if you’re in Muscat this is a must visit Place. There’s only certain times of the week that visitors are allowed inside the mosque, and women must dress conservative (long sleeves and pants) and cover their hair. So I woke my abaya and head scarfs. Men also must be wearing long sleeves and pants by the way. We walked around this elaborate mosque and every single detail in the architecture was extremely elaborate. The ceramic tiles were hand crafted and painted and each panel was unique and extremely beautiful. There’s also a separate female prayer room aside from the males. The women’s was smaller and less elaborate, but still beautiful prayer rug and the doors were even hand carved and gorgeous. Then men’s prayer room had an incredible Swarovski chandelier and a giant rug that apparently took a huge amount of labor. It was awesome! The stained glass, ceilings, doors, everything was beautiful. Both prayer rooms require you to take your shoes off, so we just left them in a cubby and walked around barefoot. We checked out the abolition rooms (I need to make sure that’s the actual name) where there’s many water faucets to cleanse before prayer time. 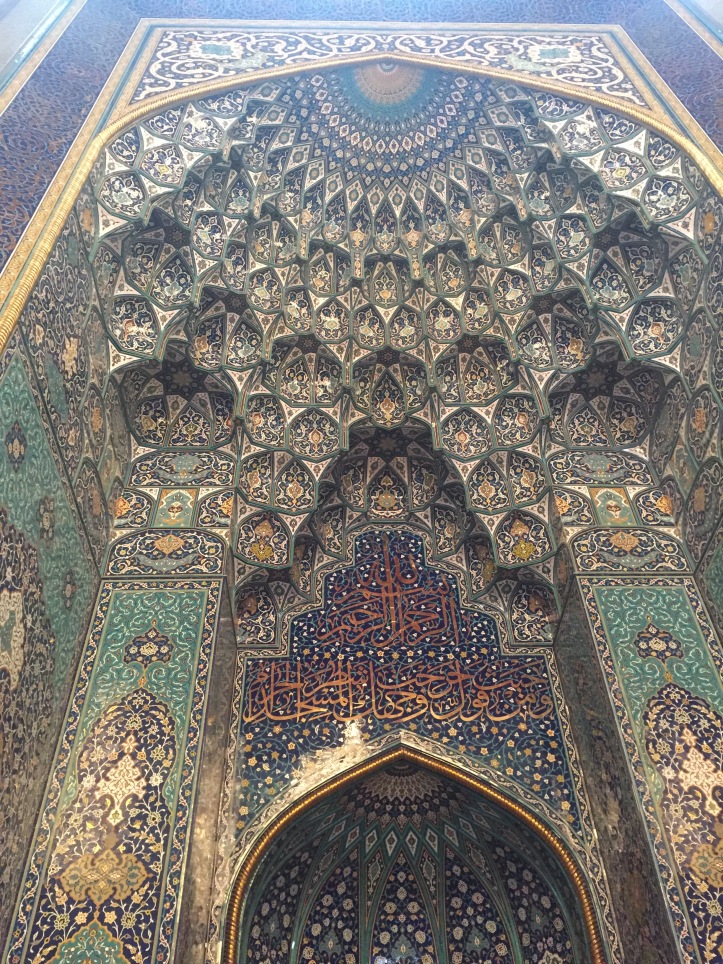 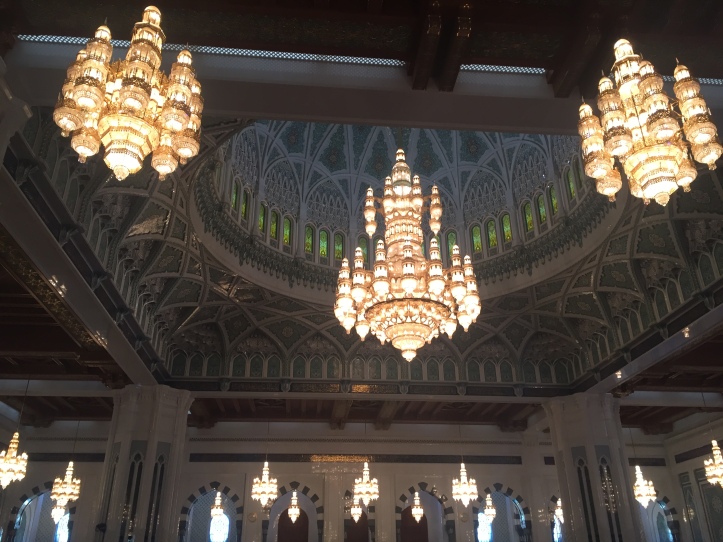 The highlight of the visit was in a little side room that offers educational talks about Islam to the visitors. These women were extremely open, honest, and inspirational. I held onto every word they said, agreeing with much of their insight. Islamic faith is extremely misunderstood in the media. Theirs beliefs that the woman are lesser than the male, and that many muslims are violent, but this couldn’t be farther from the truth.

We started by learning about the religion in general. It all centers around allah, the one god who is neither male or female. Muslims pray five times a day, this time changes depending on the time of the year but they play the call to prayer to let everyone know it’s time. The men go to the mosque to pray whereas women are allowed to pray in the privacy of their own home if they wish. If they were to pray together the men go in the front and the women behind them. They described this is the way to reduce any distractions, keeping everyone’s mind on allah. The men’s mosques are so fancy and elaborate because men aren’t allowed to wear crystals or silver or gold (the women can) and the women can also pray at home… so to make up for that their prayer spaces are really nice. I also learned that the covering (abaya and hijab) aren’t necessarily part of the religion, but more of a cultural thing. For example, some women choose to wear a niqab, which covers their face, just showing their eyes. This practices isn’t even allowed in the holy city of Makkah and women must be showing their face. Also, for those of you who don’t know, all muslims should make the priglimage to the holy cities of Makkah and Medina at some point of their life, called Hajj. These cities are both in Saudi.

The women also talked about how praying just helps keep their mind clear about the only thing that matters, which is being the best person you can be. She talked about finding your light, which can be dimmed with sins and bad intent, but the prayers help to clear this and keep you focused on being your best. In honestly had many parallels with the Hawaiian culture. It reminded me of the story of the bowl of light. This is the belief that we are all born with a bowl of light, but as you get older and do things that are not pono, or not the best intentions, you get a rock in your bowl of light. If you keep on doing these unrighteous things, your bowl will be full of rocks and no light. But at any time in your life you can turn your bowl upside down and empty out those stones, resulting in a bowl of light. It’s just up to you as your person to always do what’s right.

They discussed the importance of keeping and open mind and educating those from our country of residence of how different Islam is than many people’s perceptions. So I highly encourage all of you to keep an open mind, do your own research on the topic (don’t just rely on the media) and make sure you’re not judging people that you know nothing about. It’s so easy just to accept these other people’s beliefs, by no means does this mean you have to convert your own beliefs and mindset, just be open and understand that everyone things a different way, there’s no right or wrong way of living, so you might as well educate yourself as much as possible and start accepting others instead of just judging.

When I tell people that I go to school in Saudi Arabia or they hear that I’m traveling in the Middle East many people feel sorry for me. But you shouldn’t at all, I don’t have any negative feelings whatsoever for this wonderful place. If anything you should feel bad that I went to college in Pennsylvania! (Haha only kidding… I made the most of it by traveling off campus). But The people here are so kind and understanding and helpful. In Oman strangers constantly asked if we needed help, or they would give us directions and even offer to have us for dinner. I didn’t have a single moment when I felt unsafe.

About wearing an abaya in Saudi, yes I do wear one when I’m off campus, and I really couldn’t care less. Who wouldn’t want to blend in as a foreigner? Also then I don’t have to choose an outfit I can literally wear PJs all day and no one would know. Also, people can tell I’m a foreigner (because I don’t speak Arabic) and people get so excited to hear my story and welcome me to their country. I have had nothing but positive experiences thus far. I know there are bad people everywhere, but try not to let the actions of a few reflect on an entire population.

Okay sorry for that tangent, back to the travel blogging. As you can tell I really enjoyed talking about Islam with these wonderful women, we chatted as they served us local dates and coffee, and they even gave us a little gift of an Omani incense burner before we left. I also got a ton of reading materials about Islam, so I’ll make sure to post about some highlights of things I learned from these books.

After the mosque we went to a nearby mall. It was nice to be back in civilization and eat some familiar food. For lunch I had an amazing falafel sandwich with pomegranate balsamic sauce. It was amazing! We also went to a coffee shop and got some internet service to figure out where we were going To sleep.

After the mall went to the Oman National Museum in Old Muscat. This was 5 OMR for adults but fortunately free for students, and they accepted our KAUST IDs! You could spend all day in this museum, there’s so much history and culture. There were tons of exhibits as well, it was super nice. We spent a few hours wandering the halls, watching a documentary on Oman, and learning as much as we could. Did you know that at one point Zanzibar was owned by an Omani princess? Now if you visit there are still influences (guess lll have to go check that out soon!!)

A few hours later we were headed to Haramil, where we went to the beach we went to on our first day in Oman. You can pay to camp here for 5 OMR, and you’ll have access to showers and restrooms, which makes it so worth it. This is called the Capital Area Yacht Club. We went snorkeling for an it (the visibility wasn’t amazing) but we saw some fishes and even a ray! Once the sunset we headed just up the street to the Marina Bander Al Rowdha, this is the marina we had been scuba diving from earlier on our trip, and there was a fancy restaurant and bar attached. We enjoyed some alcohol (strawberry margarita yum!) and a delicious salad with caramelized peppers and balsamic. After dinner we returned to set up our campsite, once again we had the entire beach to ourselves! This was the most pleasant night of sleeping. It was still very very hot out but at least it didn’t feel as humid as the night before!