(Sidenote: sorry this posts is a few weeks late I have been preoccupied by holidays and being home with family)

The next day I set my alarm for 6 AM to do an early morning walk through a famous trail in Ubud called the Campuhan Ridge Walk.  All the way on the end of this trail was where I was having a spa day, at Karsa Spa.  I read reviews that this ridge walk gets very hot during the day so the best time to do it was early morning.  My walk from the hostel to Karsa Spa was about 3 miles so I left super early so I could get breakfast before my 8:30 appointment.

This was a great decision and I ended up eating at Karsa Café, attached to the spa.  It was one of my favorite experiences in Ubud.  The restaurant seating was all on platforms overlooking a beautiful lotus pond with colorful flowers.  It is also surrounded by endless rice terraces and it was a very beautiful sight to behold.  I was thrilled to find vegan tembe scrambled on the menu, which was so so delicious.  I would eat this again any day, highly recommend.  I enjoyed my breakfast views with a delicious cup of coffee and just meditated to the tranquil sounds of the water fountain and heavenly smells of the incense that was burning nearby as an offering.

I have never been to a proper spa before, and this wasn’t a budget spa either this was an all-out super nice place.  I got a package deal which included a 90 minute massage, a scrub, bath, hair mask, and pedicure.  It was such an amazing day.  When I arrived they sat me down on poured me some delicious local lemongrass tea (which I know is my sister’s favorite so I had to try it).  They give you a sheet of paper where you specify the intensity you want the massage, areas for them to focus on, then you select your oil, scrub, and bath type.  All of the oils and salt scrubs were on a tray for you to sample and smell.  The whole day was amazing, stress-free, and the most amazing experience ever.  I could not give this place more praise, everything was perfect and professional.  I was so relaxed I even fell asleep during my pedicure.  The spa room had some water fountains and most music playing which was super relaxing.  There was even some thunder in the distance which for some reason is one of my favorite noises.  After the salt scrub they put a clay mask on your body, then you take a shower before heading into the bath.  The bath was definitely the most beautiful part of the day, with so many different petal colors and scents.  It was a divine 30 minutes just soaking and relaxing.  It had been so long since I had taken a bath, which at home is one of my favorite things to do.

After the bath was my hair mask, complete with a face and scalp massage.  I felt like such a princess but no complaints it was wonderful.  I felt kind of bad because my hair was a bit of a disaster of knots, but miraculously by the end my hair was smooth and luscious.  My final bit of pampering was a pedicure which was outside right next to a water fountain with views of the garden.  It was amazing, complete with a foot massage and scrub (not going to lie I am super ticklish and laughed the whole time) but after that it was very relaxing, I even fell asleep.  I was at this spa from 9-1:00, a full morning, and it only cost about $45.  So although that is pricey for Bali it was 100% worth it, I would recommend this spa to anyone who is visiting Bali.  It is super easy to book with them on their website and they are easy to contact via email.

The taxi driver I had met the previous day in town, Gusti, met me at 1:00 (apparently he got there super early at like 11:30 because he didn’t want to keep me waiting-such a sweetheart).  The previous day we had agreed on transport on a motorbike because it is cheaper than a taxi, but because there was rain in the distance he brought the taxi van.  While driving, Gusti told me all about his life story, and about his family and kids.  I asked a lot of questions about Hinduism, and he was super happy to answer.  I didn’t realize that every single family had a small temple to pray, and some of these were super elaborate.  Every 200-something days the house has an anniversary of their temple where they have a celebration.  The whole family comes together to make these elaborate bamboo pole decoration things (sorry I don’t know what they are called) but they have an offering hung.  He told me that most people put out offerings and incense 3 times/day but it is flexible. Anyways, due to the ominous rain clouds towards where the famous rice terraces are located, Gusti decided to take me to a spot known as “Bali Swings” that was in the other direction.  It was the most ridiculously touristy place I have ever seen.  I am one of those tourists that enjoy the quieter places that aren’t necessarily well known- and this place ws the opposite.  I ended up just going and taking photos, because to actually ride the swing was $35 USD, which is more than I spend on a hotel and food per day, sooo I had to pass.  And the people I saw there were absolutely ridiculous with a full face off makeup and crazy nice dresses like they were going to prom.  Definitely not my kind of scene but I giggled as I watched people pay so much money to get an Instagram picture.  For some entertainment go look at the “Bali Swings” tag on Instagram, I am sure it will be worth it. But it was a beautiful landscape with a river in the background with a lush forest.  Plus there was a super cute puppy there I played with so it was def worth it.

Pretend this is a photo of me on a swing 😉

After Bali Swing we headed back to Tegalalang rice terraces.  Fortunately the skies cleared up completely so we had beautiful weather.  Right before the terraces we stopped at a coffee farm called Ke Bali Geo.  This is one of the locations that farms luwak coffee.  I am a fan of sustainable ecotourism (obviously) an I had read online that luwak coffee is unsustainable and often times leads to inhumane conditions for these luwaks, so I was very wary about going to this farm.  But upon arrival I was pleasantly surprised that they were kept in large cages with an area for them to sleep (many farms have them in super tiny cages with metal flooring that is terrible for them read more here https://www.peta.org/features/civets-suffering-cruel-coffee/).  Sorry as a backstory, many of you guys probably have no idea what a luwak is.  They are a civet cat (although locals call them mongoose) which are a pest animal in many areas of Indonesia. They eat the berries of coffee plants, and when they are digested in their gut which apparently “improve” te coffee due to protease enzymes which create fermentation.  This coffee is some of the most expensive coffee in the world, at about $100 USD/ kilogram.  As with any product that involved animals, it is so important that you do your research in order to ensure that the animals are treated with kindness (which is almost never the case in commercial products- sorry for that mini-rant).  Despite my distaste for luwak coffee, I do suggest this farm for their other coffee and teas.  The highlight is a free tasting of 15 teas and coffees.  Literally free, which is super nice.  Each flavor was also made from plants harvested at the farm.  Exotic coffees from stinkfruit (aka Durian) and teas from mangostein, it was a super cool experience.  I highly recommend just checking it out if passing the rice terrace.

Left is Luwak poop, right is a bunch of spices harvested at the far 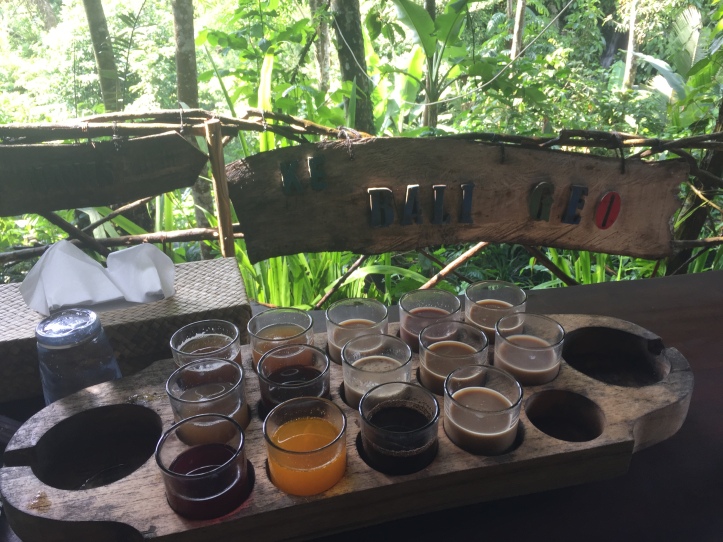 The tea and coffee taste tester at the farm, so yummy

The Tegalalang rice terrace is a pretty typical tourist spot in Ubud.  I didn’t really know what to expect, but it was a lot more touristy than  I anticipated, which is totally fine, but so amusing the difference that a photo has versus reality.  The rice terrace has restaurants and souvenir shops along the entire road, each café with a spectacular view of the rice terraces.  You even are suggested to pay to walk down the stairs down to the rice terrace.  But I am not saying not to go there I am just saying don’t expect to be on a quaint little terrace in the middle of nowhere.  It really is a spectacular view and is worth the hype.

After the rice terraces I wanted to go to some temples up the mountain, but due to the storm previously in the morning there was a landslide blocking the road so we went in the other direction to Tegenungan Waterfall. You walk down a long set of stairs towards the waterfall, which is absolutely stunning.  Due to the rain, the water was a bit brown but nonetheless it was very majestic.  It was a relatively quick stop so I definitely suggest it if you are anywhere near. 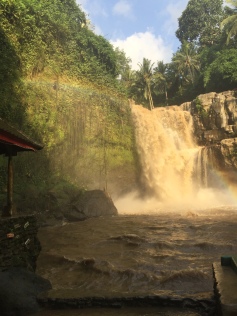 After the falls I headed to one more stop before heading to Ubud, and it was a temple called the elephant cave, or Goa Gajah.  It is a beautiful temple which is pretty large.  Besides the cave, there is a site down the hill in the forest with a beautiful little waterfall with lush surroundings, it was gorgeous. 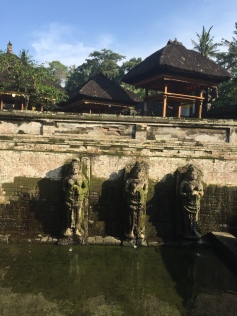 After this I had my driver drop me off at the Ubud market so I could have one last quick Christmas shopping session for my parents.  After buying some last minute gifts, I headed back to my favorite coconut ice cream shop, and then back to my hostel to pack up for an early departure the next day.  In the evening I just hung out with some of the girls staying in the hostel and we had some beers next to the pool, it was such a lovely day. 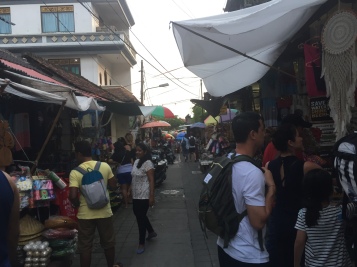