Idyllic Santorini (on a budget)

Hi everyone, I made a video with some highlights of my recent trip which you can watch here:

I last left off with our last evening in Athens.  Following this, David and I woke up bright and early to catch the metro from our hostel to the port where the ferry’s depart from. We had reserved tickets online in advance to ensure that we had seats because I heard that sometimes ferries sell out in the summer. I was reading reviews for all t companies and there are some small “fast boats” that take half the time but the reviews indicated that these boats were cancelled often, very tight, bumpy, and people often got sick. Because David gets seasick, we went with the longer ferry, called Blue Star, that would be a 7 hour journey. Because we were so early we grabbed some pastries and coffee to go, and got great outdoor cushioned seating. The boat ride was super comfortable, with no waves, but beautiful views because we were outside. I fell asleep for the first few hours and then rested and enjoyed my view for the remainder. But I was happy to just lay down and relax after so much walking around Athens.

The ferry was massive, with lounges, restaurants, bathrooms, and 3 lounges. Just a little side note: as entertainment we watch different groups of girls have full on photo shoots on the boat, posing by a Greek flag. For the entire 6 hours they’d pose, change outfits, and take a million more photos. I don’t even know how they have room on their phones for the amount of pictures they took. Which is saying something because I also take a lot of pictures, but honestly nothing compared to this photo shoot!

We arrived in Santorini and the ferry terminal was so crowded and chaotic.

We were staying in the more “budget friendly” area of Santorini called Perissa, and I had read online you first have to take a bus to the central hub of Thira before transferring to a bus that takes you to Perissa. But at the port we found out that there was a direct bus, which saves you the 30 euro cab ride to the apartment. We took the local bus to get around Santorini, and it was super convenient and came to the bus stop every 20ish minutes. We stayed at a cute little hotel called Aretousa Villas, which was very conveniently located and close to the bus stop. We stayed in the “budget twin room semi basement” which sounds a bit sketchy but it turned out to be one of the nicest places we stayed. Despite being called a basement, it had windows and good lighting and the typical Santorini look to it, with white walls and gorgeous blue trim. The owners were super sweet and I highly recommend staying here if you have the chance and don’t want to pay for one of the super nice hotels in Thira or Oia

We unpacked our bags, threw on her bathing suits, and took the 3-minute walk to the black sand beach. This stretch of beach is super long and has restaurants, cafes, and shops all along it. It’s very cute and has a nice vibe to it. There’s also several areas with umbrellas and sun-chairs that restaurants will let you use it if you buy food or drinks. We lounged in the sun and went for a swim in the sea. The sand wasn’t as black as the black sand beaches in Hawaii, but it was still very unique and worth a visit. 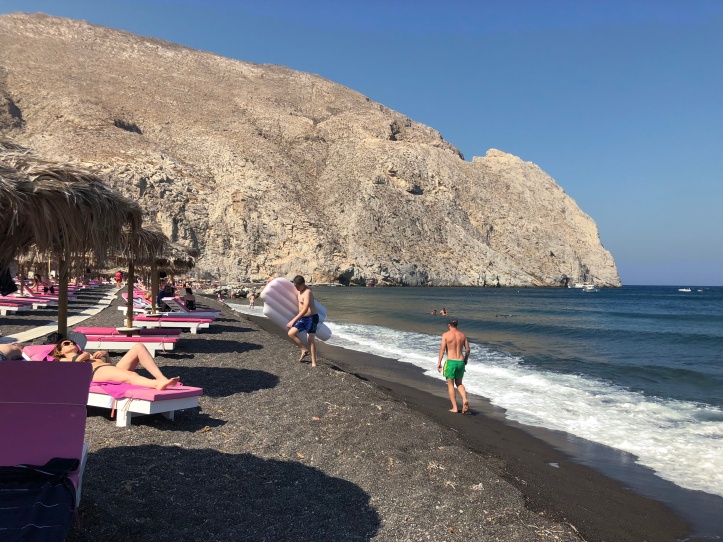 I did a bit of souvenir shopping and after a rest on the beach we headed back to the villas for a shower before going to dinner in Thira for sunset.  We grabbed a bus (heads up: the bus schedule isn’t really that accurate, you sort of just wait at the bus stop and hope for the best). I really liked Thira for sunset, as it was a lot less chaotic than the famous Oia, but the sunset was just as beautiful.  We arrived in Thira around 7ish, and the sun goes down between 8 and 8:30 so we had just enough time to walk around and choose a restaurant. After making our reservation, we walked around and took photos of the classic white buildings along the cliff with the dramatic blue ocean and blue domed chapels. It is so beautiful and not to miss. The best part was that it wasn’t too crowded at all. We enjoyed some Window shopping before heading back to the restaurant. I came to a Greece knowing that Santorini sunsets are very famous so we set out to find dinner with a perfect rooftop sunset view. We lucked out and found a super nice restaurant with some amazing views. We had fava, a specialty in Greece that is grown right on Santorini. It’s mashed up yellow split peas served with fresh olive oil and onions. Sooo good on some freshly baked pita bread. David ordered grilled Dorade, a Mediterranean fish. I had mushroom risotto. The highlight was definitely the views though, with a picture perfect sunset. 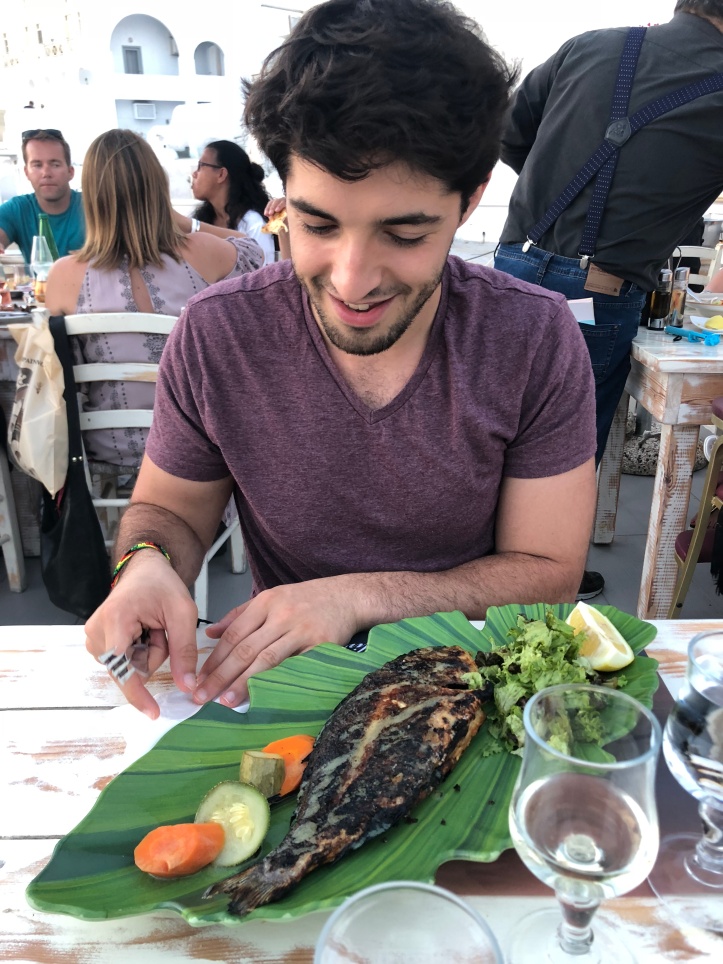 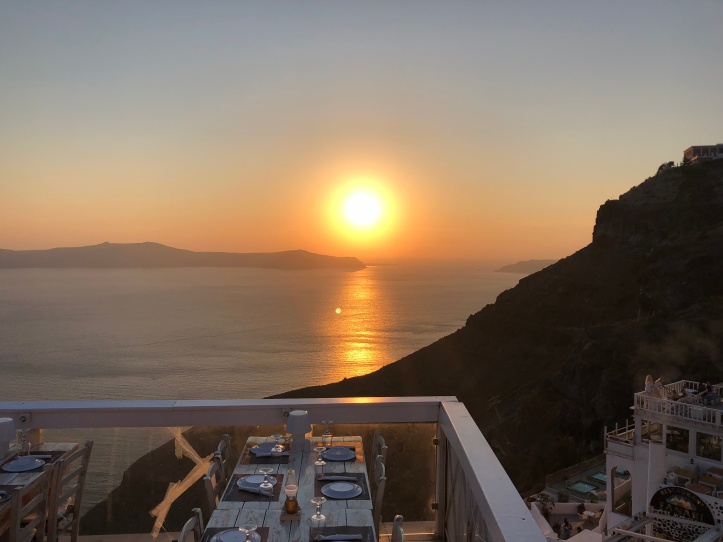 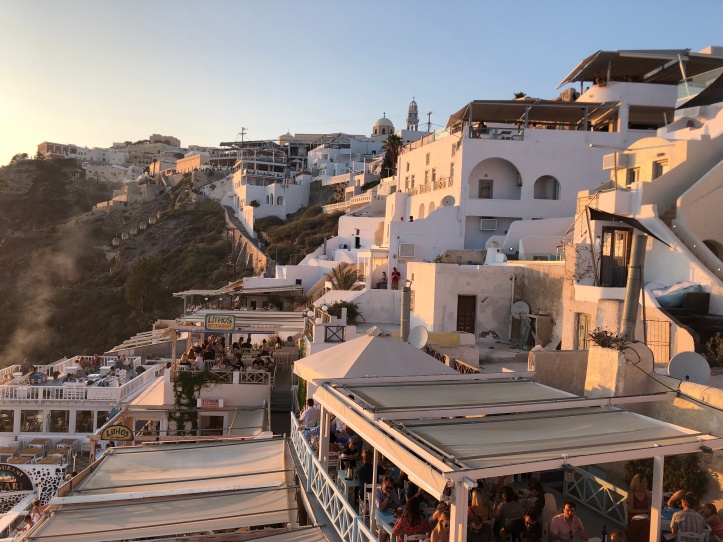 After dinner we went on a mission to find dessert. I wanted gelato and David wanted baklava. I also wanted a dress for the wedding and went on a mission but ended up not being able to find one cheap enough. We did eventually find a gelato store there where I discovered the wonderful flavor of Ferrero Rocher, which became an almost daily occurrence for the rest of the trip (oops). We walked around quite a bit until we found a little treat with a bunch of take-out food restaurants including a cute little bakery. David got his baklava and we found a nice spot outside to enjoy it. At about 10:30 we grabbed the “express bus” back to Perissa. This was super nice because it skipped all the little towns in between cutting down transport time. The unfortunate thing is that you never know when you’re on the express bus or what time it’s gonna come. But with a little luck we got it a few times! We headed back to our villa, and got ready for another busy day ahead!