Apologies that this blog is so delayed, I have been a bit busy and just been putting these off, but I really do love looking back on these journals and remembering all the fun times I have had.  I have had this blog going since 2014 recording almost all of my travels, so I don’t plan on ending this tradition any time soon.

I last left out on the incredible island of Milos.  This was the most beautiful spot we visited, but unfortunately a lot went wrong.  I had my mind set on going on a snorkel cruise around the island. But things didn’t work out and the winds and waves were too strong so they were cancelled for our stay.  I was super bummed about this but we decided we would just rent an ATV and try to see as much as the island as we could.  But this also had its obstacles because apparently you need an international license to rent a motorbike or ATV if your license is outside of Europe.  We even went around to multiple car rental agencies and got turned down.  Finally, we had a little ray of sunshine when we found Safari car rental in Adamas, who had electric bicycles for rent.  They were pretty expensive but we were out of options so we gladly accepted and filled out the paperwork and we were on our way.  I was honestly blown away by these bikes.  You peddle like normal, but when you get on a hill the motor helps boost you up pretty fast.  Milos is pretty hilly and we rode to the other side over a mountain in just 15 minutes.  When we arrived to Sarakiniko, an ominous cloud was over us.  As soon as we locked our bikes, rain started to come down.  We decided to head to the beach anyway, hoping it would end soon.  Before long, the sun cleared and the blue skies returned.

Sarakiniko is famous for its beautiful white stones which plunge into the bright blue waters below.  I think photos will best do it justice. 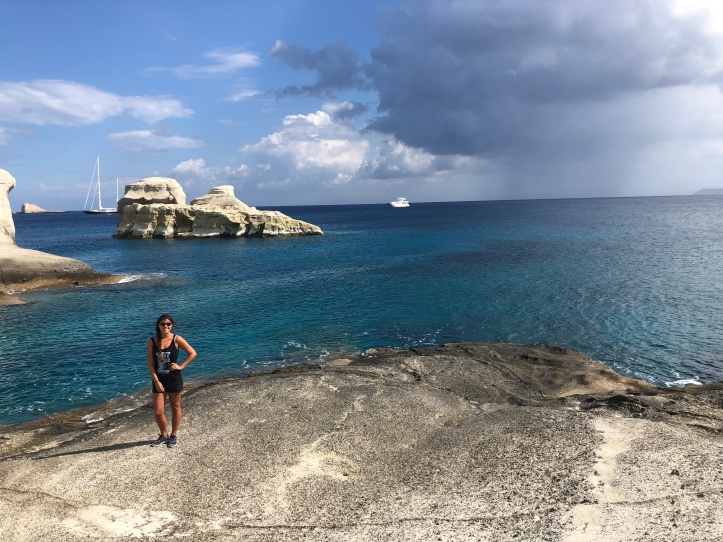 This is such a beautiful spot, we probably could have spend the whole day sunning on the hot white rock and then leaping into the cool blue water below.  There was not much to see snorkeling but the water was super clear and there were some areas with lots of little fish that we checked out.  It was also fun to swim (safely) into the dark/deep caves along the coastline.  It was very different than the Hawaiian coastline that I am used to.  After swimming and taking a million pics (thanks David) we headed on our way down the coast. 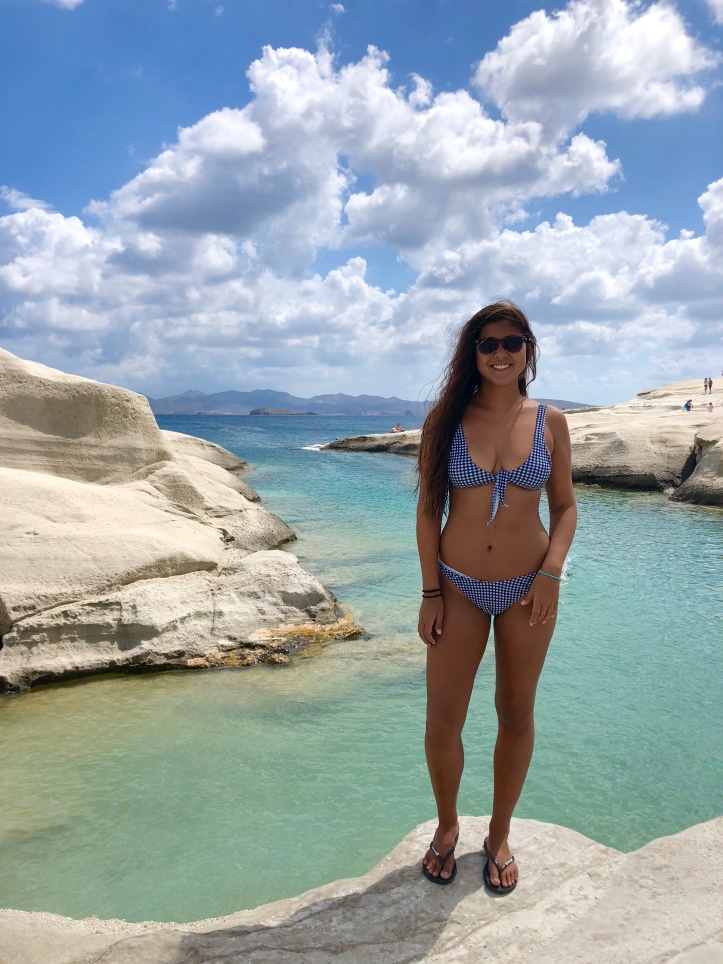 Look at that water and that scenery!! And that was right after a rain storm too. How unreal!  Okay so our next destination was another spot I had read about online called Papafrangas.  The road to get here was over a small mountain, on a main highway.  Even though you might read about some of my adventures and assume I am an adrenaline junkie, do not be fooled.  I am so scared of going fast (in cars, motorcycles, jetskis, and even a bicycle).  So as we flew full-speed down these mountains, I was gripping my handlebars with my life and screaming on the top of my lungs.  Surprisingly enough, getting up the mountains was fine with me, especially because we had our electric bikes to help us out.  But adding the windy roads, the ATVs and cars passing us, and the fast that we were going downhill, I was so scared.  But don’t worry mother, I held the breaks tight nearly the entire time and was as safe as I could be.  I even requested a helmet, even though the renter highlighted that it is not necessary.  Well after getting in a bike accident a few years ago while not wearing a helmet, I took that as a sign that I really should take care of myself and why not wear one.  They may mess up your hair and look silly, but worth it if it can save your life.  Sidenote, it is terrifying how many foreigners get in motorcycle/scooter accidents while abroad.  It is a very high number so if you ever travel and decide to rent a scooter, go slow, be safe, and ask for a helmet!

Okay back to the next stop, Papafrangas. By the time we arrived I was hangry (hungry/angry) from not eating breakfast, so I quickly chowed down on a chocolate croissant that we picked up from a bakery in the morning.  We got a ton of baked goods this trip, it is a small miracle that I didn’t come home as an actual croissant.  We found a spot near another little arch, and went for another little swim/snorkel.  This beach has an archway near a little opening where the water is viewable and then there is another water cave which takes you to a beach.  Sorry that was a horrible explanation so I will just show you some photos. The beach was pretty gross/plastic filled, so we opted to chill out on the rocks. 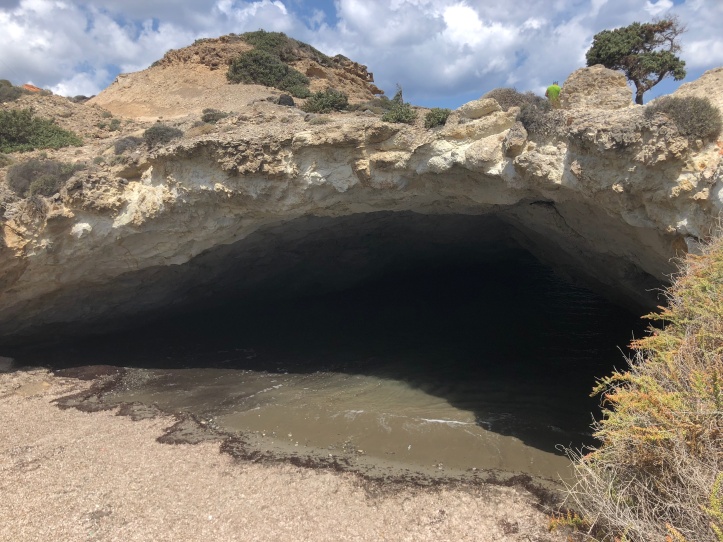 When we were biking to this beach, we passed a cafe.  There is not a ton of restaurants on this part of the island, so we decided to seize the opportunity and get some food.  It ended up being an awesome decision because we had the whole place to ourselves, and it was one of my favorite meals the entire trip.  I got an incredible roasted veggie sandwich with some sort of vegan tahini pastry that was to die for!  David got a creek veggie sandwich as well which he loved.  The views were beautiful, but the wind was quite strong.  The restaurant owner was very kind an moved us to the bar area that was protected by the wind.  At first we were getting some weird vibes from the waiter, but he ended up being super sweet and accommodating.

After lunch we went back the way we had came from, and went to a spot just 50 m from the previous beach, where we found another incredible “hidden” jem.  Ok so other people definitely knew about it but it was super quiet when we went.  I know if there was a beach like this in Hawaii it would be jam packed.  This was another arch way leading to a beach, I am really bad at describing this so here are more pictures. 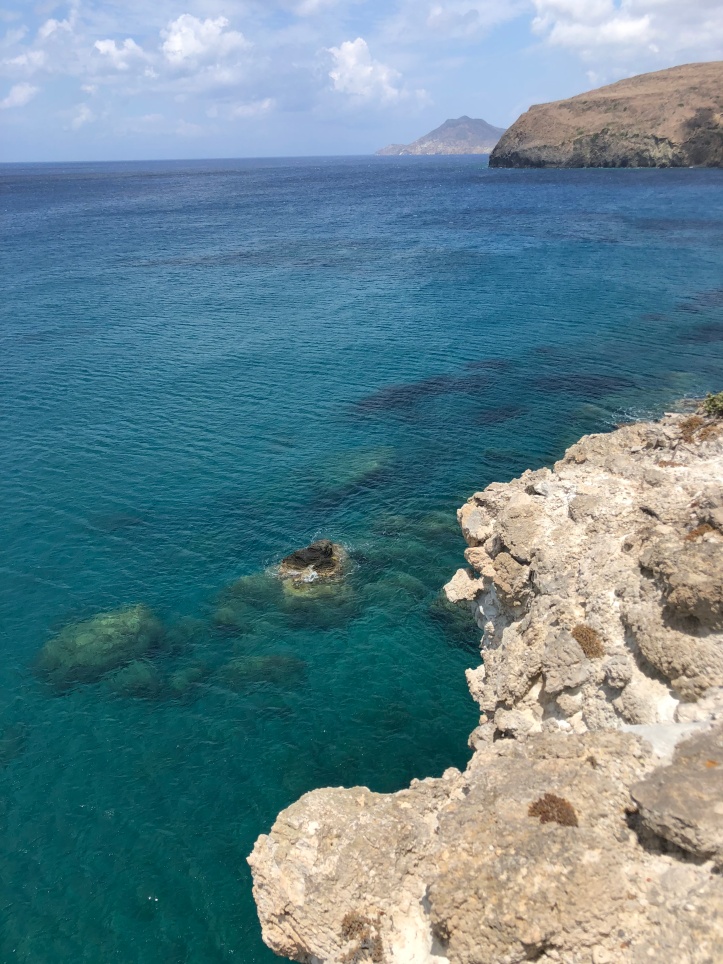 The path down to the beach looked a little treacherous, which was probably why not a lot of people were down there.  But it looked worth it so we headed down, and it was fine.  There were only a few people at the beach so it was a perfect spot to hangout at.  We swam all around, exploring hidden caves along the coast and checking out the arch way.  It was beautiful!  I highly recommend coming here as well. 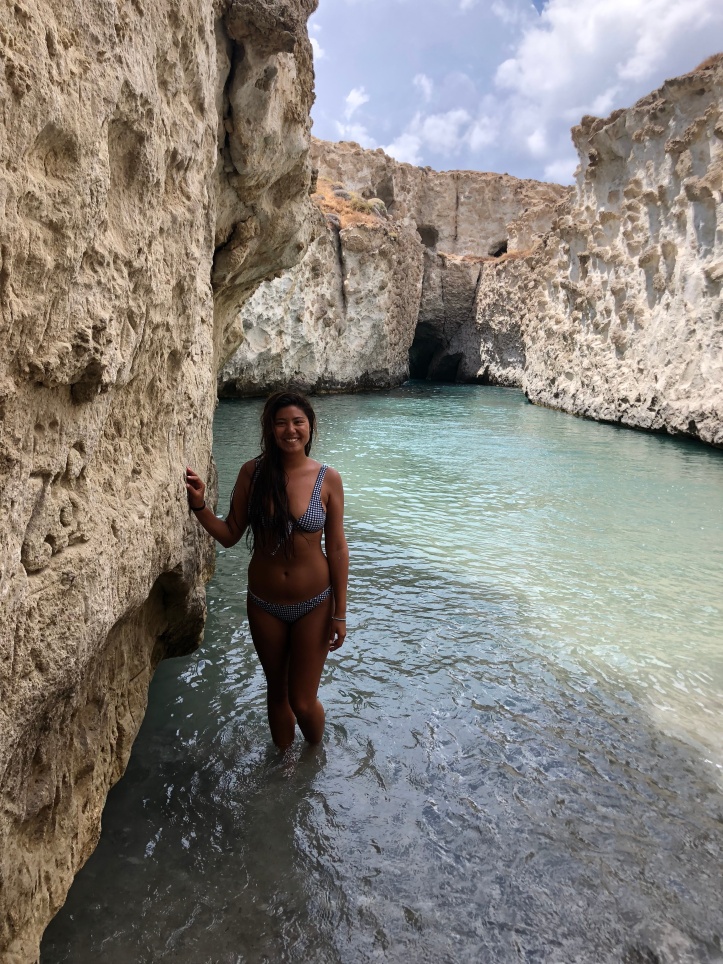 It might be difficult to believe, but photos do not do this place justice.  It is magical!  Check out the youtube video for a few GoPro clips of us swimming here.  After a few hours of frolicking, we decided it was time to head on to the next spot.  We didn’t really have a plan but we used my Maps.Me app to decide where to head to next spot.  We headed across the island to another town called Pollonia.  When we arrived, we saw a beach that was moderately crowded, surrounded with some restaurants and shops.  This is what the beach here looked like. 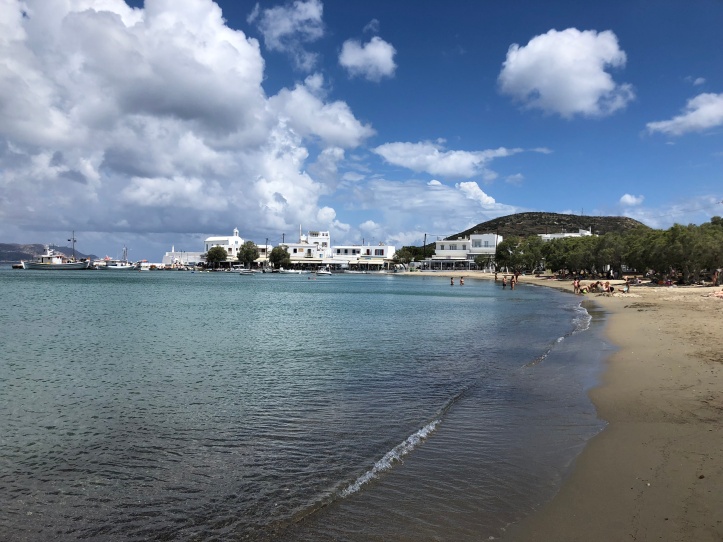 It was pretty but nothing out of the world.  So we kept on walking along the coast, and found a really adorable spot just minutes from this beach.  It was near some hotels, so there were guests swimming in the crystal clear water.  The neighborhood looked adorable, and would probably a great place to stay.

I really liked this spot that had some colorful boats in the shallow crystal clear water.  It looked like this: 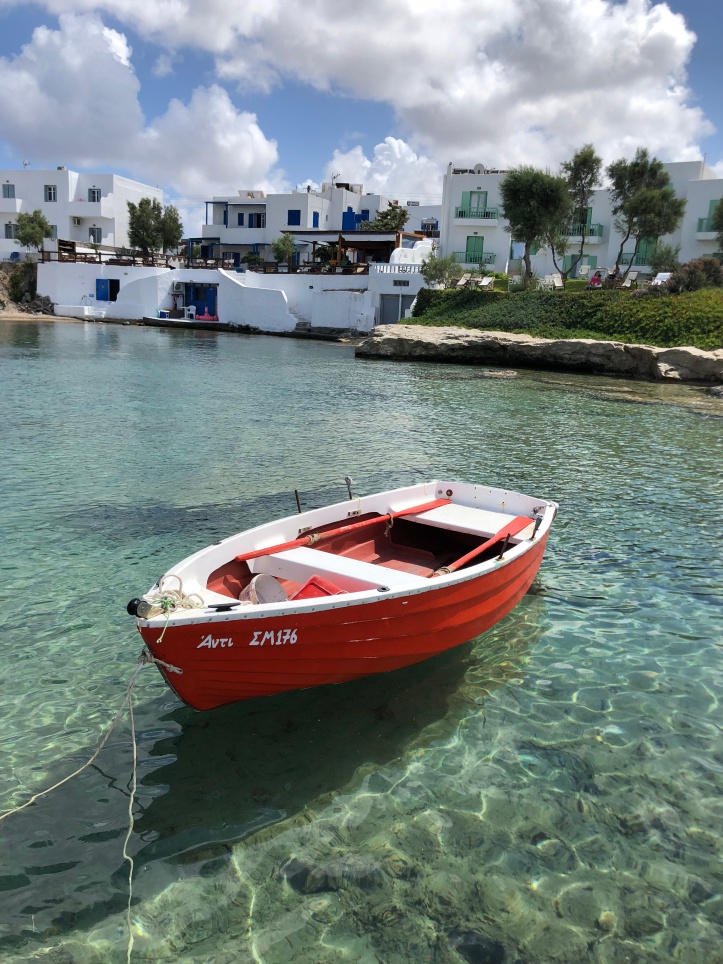 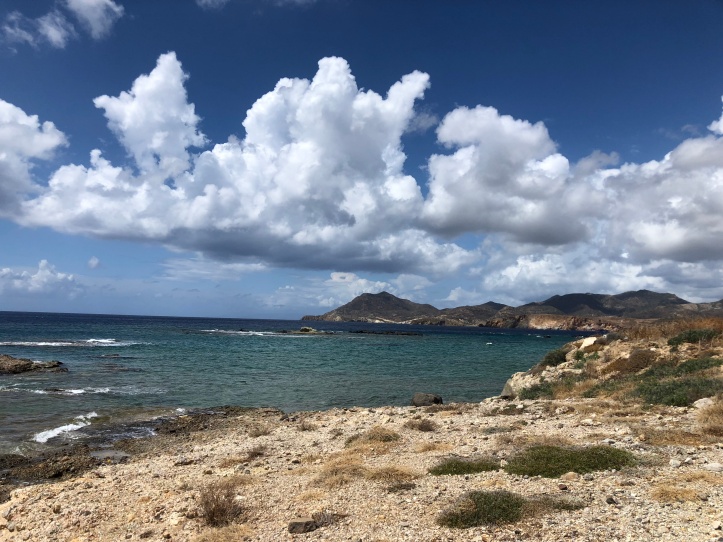 After this spot, we headed back on the road and eventually stopped on the end of a little dirt road.  You could see Pollonia from afar, but we headed in the opposite direction where there was a little trail, and we decided to hike. The trail was along the coast, and offered some spectacular views.  Check out this clear water! 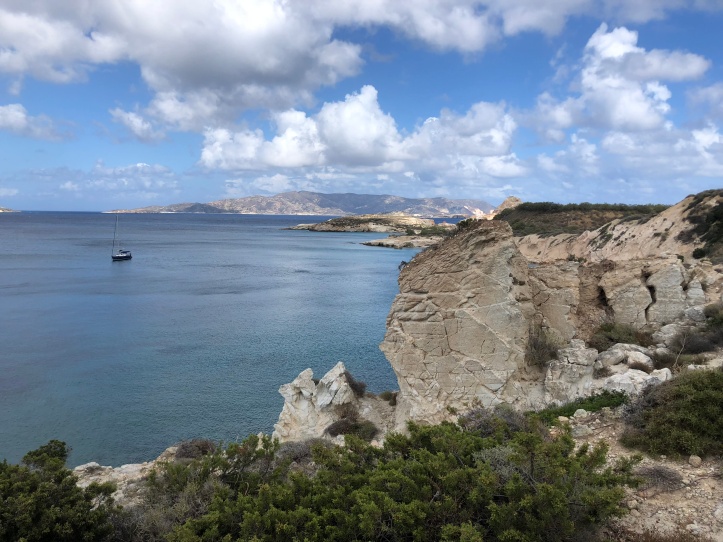 I was debating weather or not I should tell the next part of this story, but it is worth a little laugh.  After about 20 minutes into the hike we reached a point where the trail ended.  I decided that it was probably because we were supposed to rock climb down the coast to the beach below.  Sometimes I am really dumb. So I cling onto the rock, and David warns me to “be careful”.  I cheerfully responded saying, “It’s okay, I am a ninja turtle” and I am not kidding, as soon as I finished saying that the rocks crumbled below my fingertips and I crashed and burned and fell only about 4-5 feet below into a bush.  It totally could have ended way worse than it did.  But I ended up landing on my back on the bushes, didn’t poke an eye out, didn’t break anything.  I just sat there on the ground looking like a dying turtle (with my hands and legs in the air on my back) as David ran to help me up.  I sat there asking myself if I was hurt or not, but reassured “I’m fine, I’m fine, I’m still a ninja turtle”.  In the end, I only got a few scratches, mostly on my fingers from trying to cling tight on the rocks as they crumbled.  I was happy that the fall wasn’t too bad, got up, and decided it was time to head back to our bikes.  In the end, all was okay, it just turns out, that I am not at all a ninja turtle.

We continued on our way down the coast, and attempted to find a particular beach using my app.  We biked for a while along the main road, where there were tons of huge trucks hauling materials from the nearby mines (I think sulfur mines?). It was a bit scary biking with these massive trucks whizzing by, but it was okay.  We finally took a turn on a dirt road to head towards the beach, but these side roads weren’t even on the maps, and were super hilly and maze like.  We probably biked up and down hills for an hour before we decide to give up and just go to another beach on the map.  It was our last stop of the day and totally worth it because we had it to ourselves.  There was a beautiful rainbow. We climbed along the coast and even found a super secret and secluded beach to take a nap and chill out.

We wanted to avoid going home in the dark, so we started our trek home by 6ish.  The ride home was a little painful, as I was sore from the hills.  Here are a few photos of the scenery along the small dirt roads. 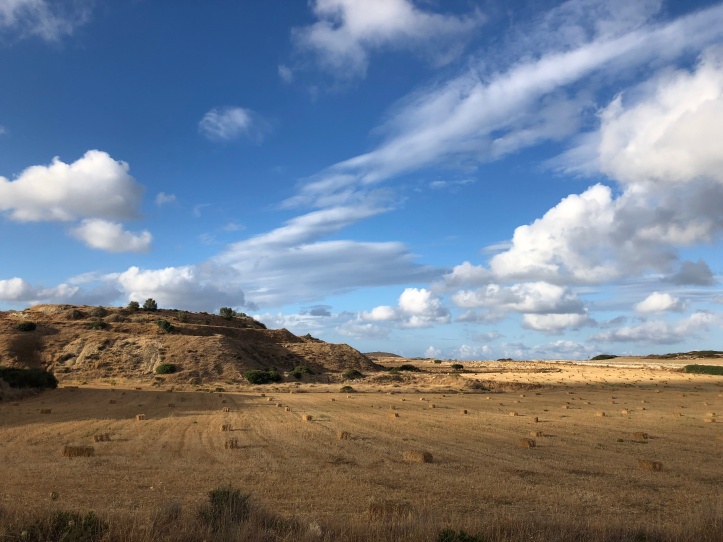 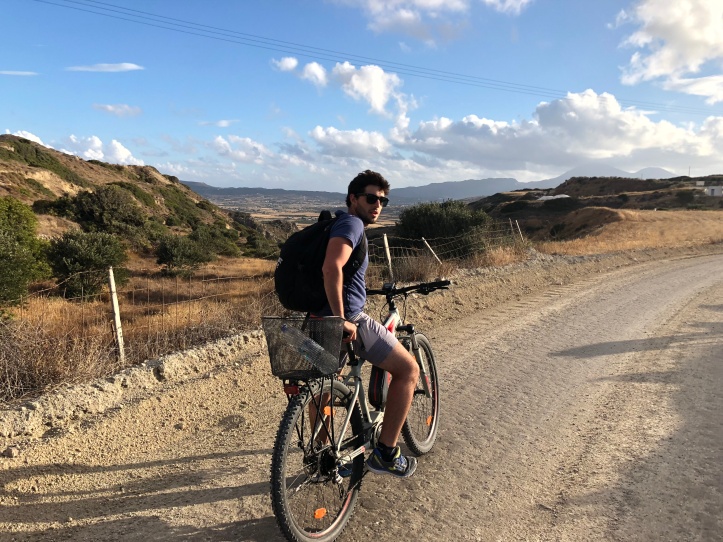 We made it back home by sunset.  Turns out we went like 30-40 miles that day.  We went home to change, and thats when the butt soreness really started to kick in.  We both didn’t want to get out of bed, but we wanted to walk around Adamas and see it a bit. We went to eat where I got this “bread salad” that I absolutely hated, another shoutout to David for eating this for me.  I ended up with gelato for dinner, as well as split peas, so I was a happy camper.