Rottnest Island turned out being a major highlight of Perth for us. I had heard that it is totally dependent on the weather and you want to go on a good day. But we risked it and booked in advance because my conference gave us an online coupon code to get 20% off so we had the reservation about a month in advance. There’s only a few companies that have boats going out, so it is quite pricey. In addition, most boats go out from Fremantle (40 minute train ride/15 minute walk) away. But we found that Rottnest Express actually had a ferry leaving from downtown Perth which was perfect for us. In addition, they even had pickup and drop off at the hotel next to ours so I was super convenient. We departed the ferry terminal and headed to Fremantle down the swan river to pick up more people. Along the way we got a guided tour of everything we passed which was super nice. Another tourist attraction in Perth is to take a swan river cruise so we killed two birds with one stone with that one.

The trip over to Rottnest was pretty harmless, with only ~20 minutes of ocean crossing, and fortunately the waves were pretty flat for us. When we booked our reservations I added on a bike rental, which was super convenient. When we disembarked the boat they had all the bikes lined up to go. So we grabbed ours and headed to the visitors center where we got a map and asked about the most recommended sites to stop at.

Rottnest Island offers a bus tour, but to get a better look at all the island has to offer. We decided to bike around the island clockwise, as recommended online because you’ll have the wind to your back.  After biking for only two minutes we came across the famous marsupial that call Rottnest home, the quokka. They are known for their adorable faces and friendly nature. They are quite possibly my new favorite animal due to their adorableness. There are signs around saying “please do not feed or touch the quokkas” but as soon as you get close to them they come right over to you and touch you. Or when you have your phone out to take a look they’ll go right up to it to check out what it is. And the best part was that many of them had little babies in their pouches!

For the whole day we didn’t really have any plan we just got lost, went down roads we thought were he right ones, walked down beaches, and then used the map to find the correct roads. So I don’t really know the names of where I went but I have tons of photos. The first stop was actually farther down the same beach that the ferry arrived on. There was a little pier and lookout point where we enjoyed the views of the crystal clear water below. Our bike around the island was about 20 km, and we only had until 4:30 to see everything so bikes made it super convenient. We got a bit lost but the islands not huge so it ends up being fine. Every beach here is different and beautiful, so I’ll just show you photos to show you! 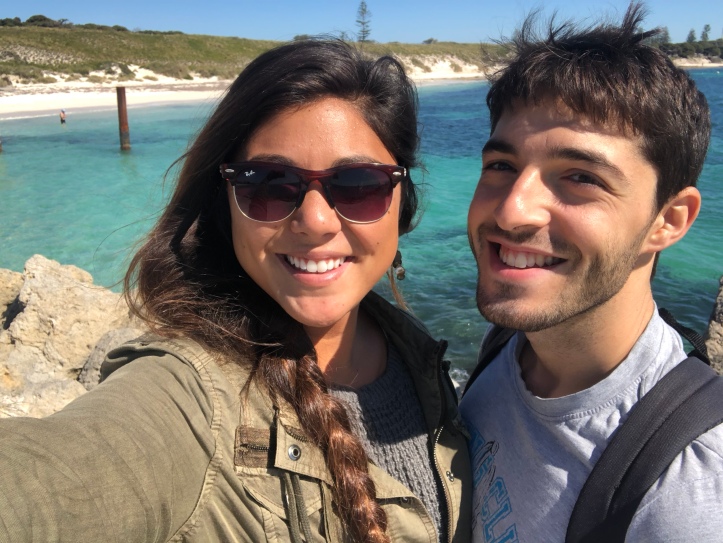 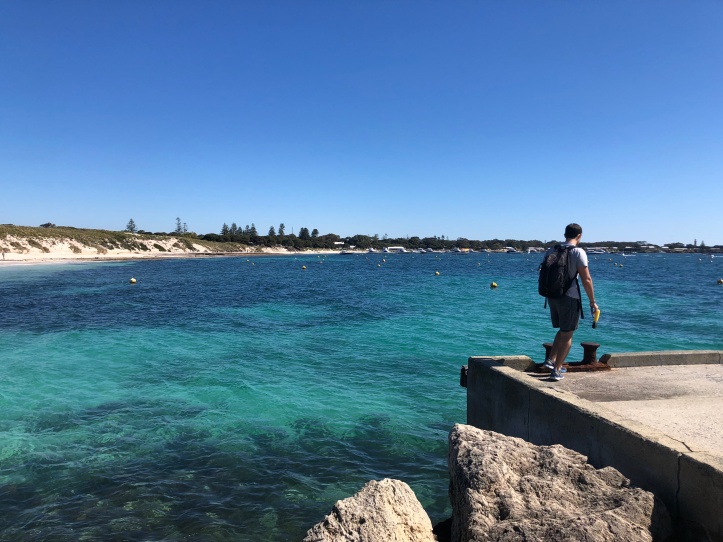 A huge benefit was that it is Spring in Australia, so there’s not a ton of people out on Rottnest so we had most of the beaches to ourselves or with very few people. 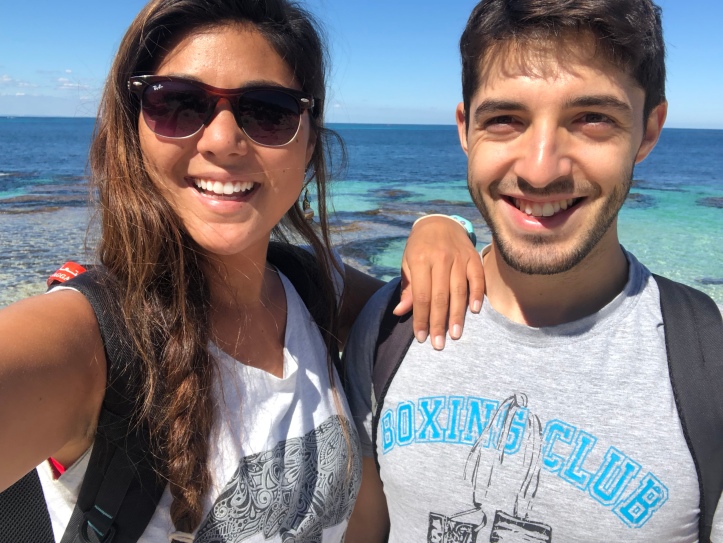 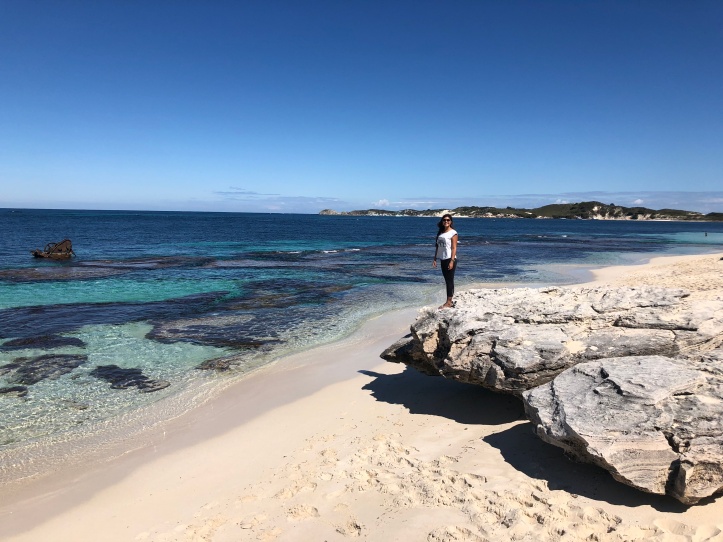 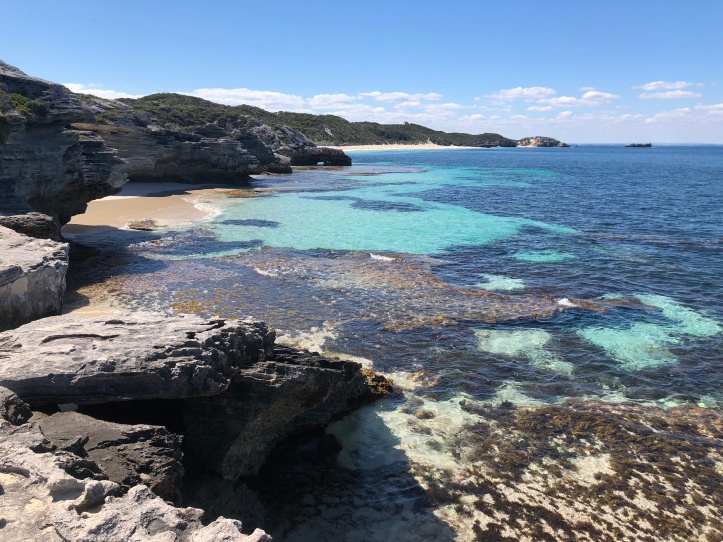 Even the road is super scenic and many of them are right next to the sea. So even though it was a bit hilly at some points, the views made it 100 percent worth it. 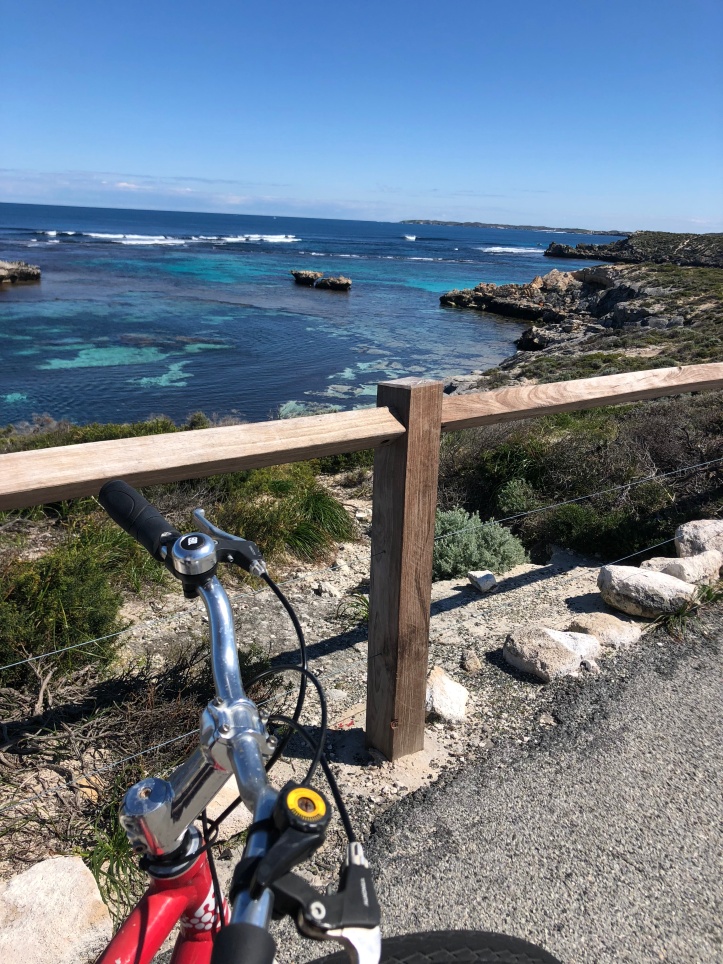 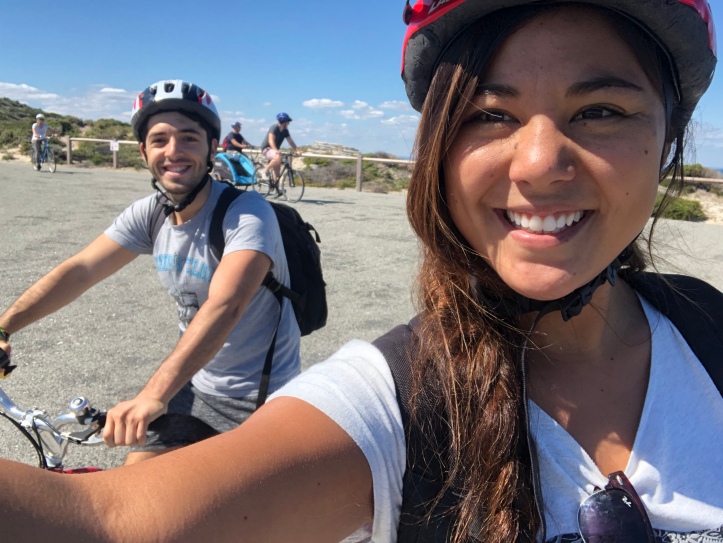 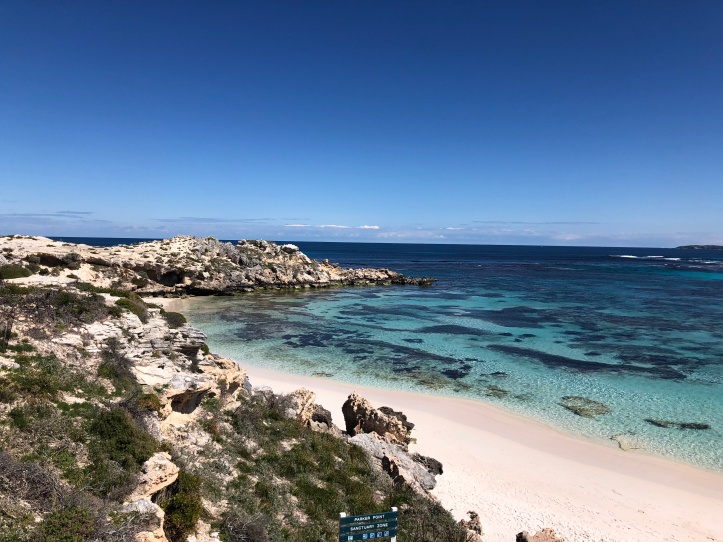 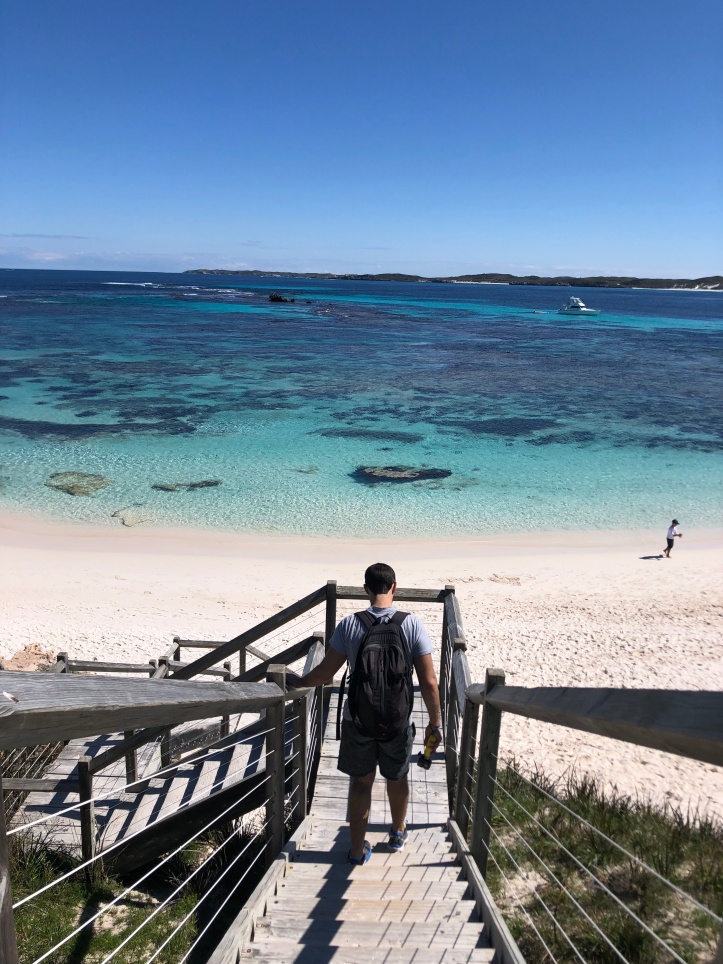 We had lunch around Little Salmon Bay where we had amazing views of the clear and blue water. We packed peanut butter and jelly sandwiches and leftover pizza from the night before. At Rottnest there are shops but only near the ferry terminal so I recommend packing a picnic lunch and eating on the beach. While we were eating we noticed a few black gigantic lizards behind us which were exciting.

We debated snorkeling but decided to skip because we still had a lot of the island to see. We continued around the perimeter to several viewpoint and making many quokka stops to watch these adorable creatures. We also biked towards the center of the island where our map noted a “pink lake”, but it didn’t turn out being pink, but it was a lovely quiet area to watch the birds and be alone with nature. We also stopped at a beach towards the end called Pinkie Beach, which has a very beautiful lighthouse. I actually knew about it because it was my laptops background for some time. I fortunately/unfortunately have a screensaver that changes weekly with photos from all over the world. This makes me write down all of the incredible places and makes me want to travel all over the world. For example, a photo of boulder beach and the penguins and South Africa made us convinced to go to Cape Town! And before we went to Greece there was a photo so Sarakiniko beach on Milos which helped us choose which Greek islands to visit! They also have had photos from both Maine and Oahu which is cool! 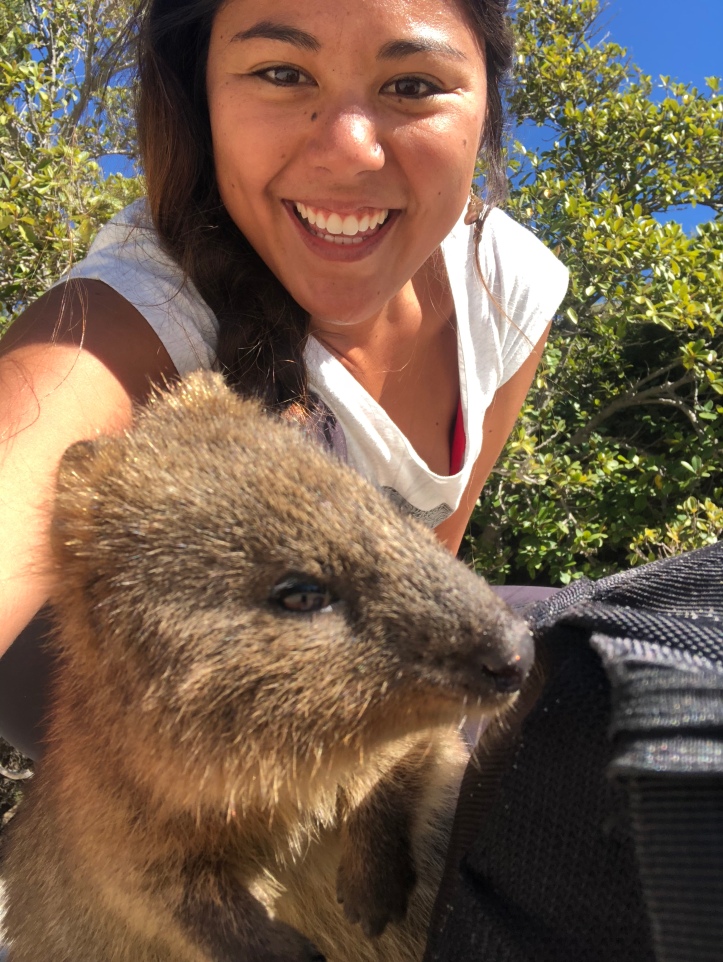 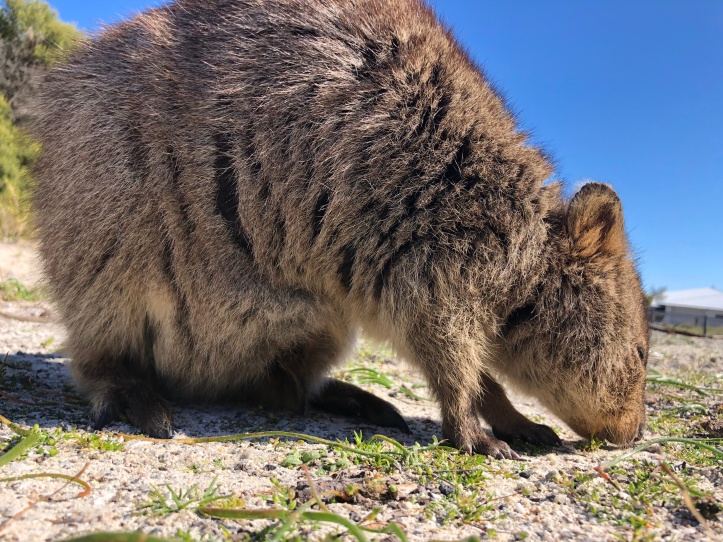 Anyways, at around 4:00 we headed back to the central town area where I grabbed an ice cream and we watched the friendly quokkas running all around. There were like 25 in this one “mall” area where all the shops were. There were even some basking in the sun taking a nap, they were so darn cute! At 4:30 we returned our bikes and hopped back on our ferry for the ride back, and we both ended up falling fast asleep. The view of sunset on the river was gorgeous.

The bus drove us home to our hotel, where we showered and got dressed to go out to eat. We went to a cute restaurant only a five minute walk away, which was perfect because we were starving. David got some sort of hot ramen and I got spring rolls and tofu pad Thai.