I know it has been quite some time since I have updated my blog, but I decided to start back up where I left off in Egypt, about a month ago.  I have been traveling, and spending quality time with my friends and family in Hawaii for the past few weeks, so finally I have time to sit down and get a bit caught up.  I am currently en route to Los Angeles, CA to spend two nights with my sister Kylie before I head back to Saudi.

Anyways, today I am going to talk to you about Abu Simbel, which is a lesser known temple in Egypt, but it was a major highlight for me.  It is a bit harder to access this site, but the effort is 100% worth it.  From Cairo, we took a flight to Abu Simbel, which had a small stop over in Aswan.  Our checked bags were dropped off in Aswan, while we had about four hours with a tour guide in Abu Simbel.  We were picked up at the airport in Abu Simbel, and had a quick five minute bus ride to the temple.  What is most spectacular about this site is how pristine and perfect it still is.  It remained undiscovered for many, many years, and thus had no graffiti or carvings like some of the other temples.  It was covered by sand until it was rediscovered in the 1800s. Another incredible fact is that this massive temple, which has huge halls inside, were all carved from the mountain side, meaning it is one rock.  Thus, one tiny mistake would mean that the whole temple would need to be rebuilt.  The temple is complex due to the side chambers inside.  In the larger temple, when you enter there is the hypostyle hall, complete with eight massive pillars and statues.

On this trip I learned that Abu Simbel was relocated after a dam was built in Aswan, which would have flooded this incredible temple.  Several ancient Egyptian sites had to be physically moved to a higher elevation to avoid destruction from the rising water.  It is crazy to me, but somehow, a huge team in 1968 managed to cut this temple into a grid, and move it up the mountain.  Once you see photos from this day you will understand what an incredible feat this was. I seriously can’t believe it was successful, I can’t fathom the planning that went behind it. 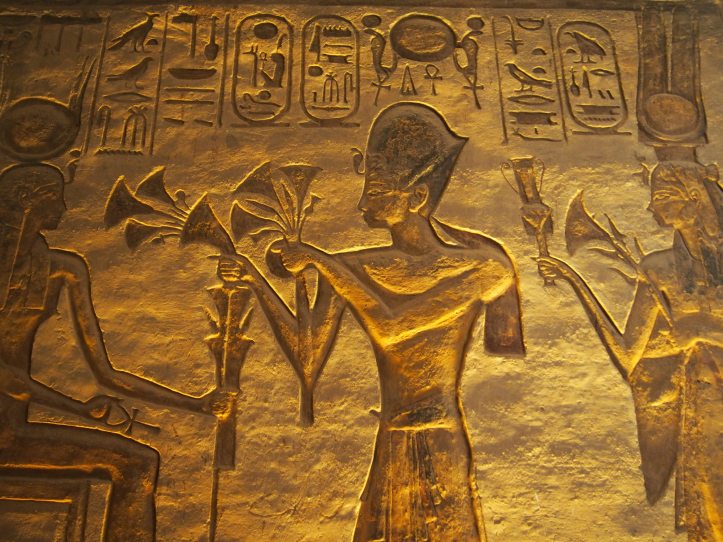 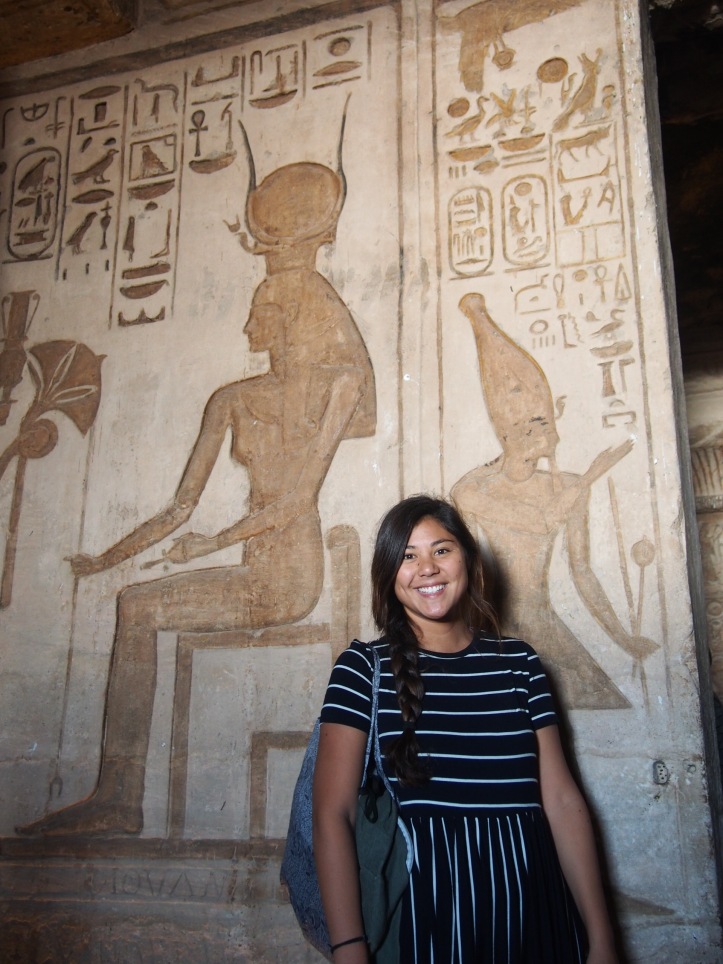 Unfortunately, we had to pay an extra fee to be able to take photographs inside the temple, but it was so worth it.  I took tons of photos this day.  Not only was the outside magnificent, but the inside had massive structures and so many side rooms with intricate carvings showing detailed stories and depictions.  There were two main “buildings” at this site right next to each other, both with unbelievable interiors. These twin temples were carved from the mountainside in the 13th century BC, serving as a lasting monument for the king and his queen Nefertari.   The larger temple on the left was unique due to the placement.  The room deepest in the temple is the most significant, built for only priests and people of high power to worship the gods.  In this room, there were four statues depicting three gods, and Ramesses II (he is the pharaoh that ordered this temple to be built).  The fact that he had statues of himself in the same size and design as the other god’s showed that he thought of himself as better than other pharaohs and more like a god.  Anyways, the sun only reaches back into this room twice a year.  And these dates are believed to be the Ramsey’s birthday, and the day he came into power.  The sun reaches all the gods except for Ptah, the god of the underworld, which remains dark.  It is crazy to me that all these years ago they were able to design such an intricate temple and were so advanced that they could plan it out to the exact dates that the sun reaches into the back room, it blows my mind. 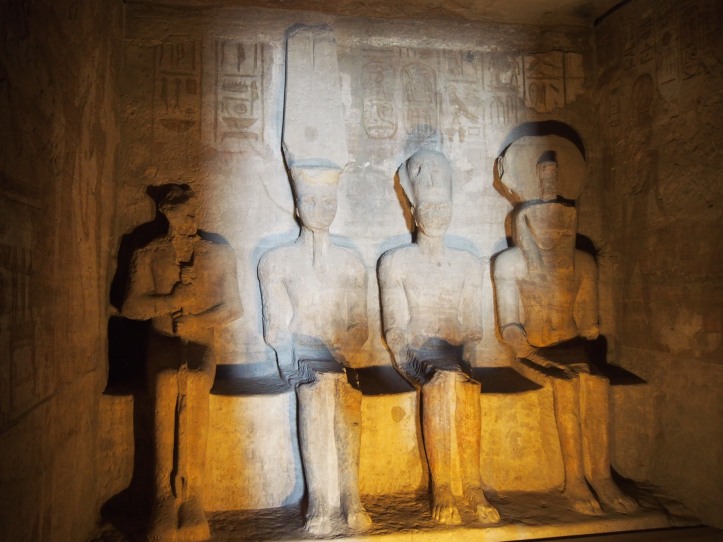 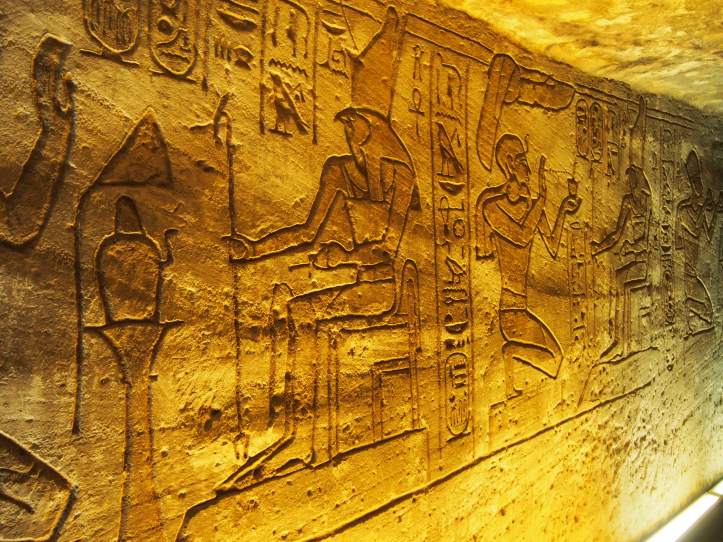 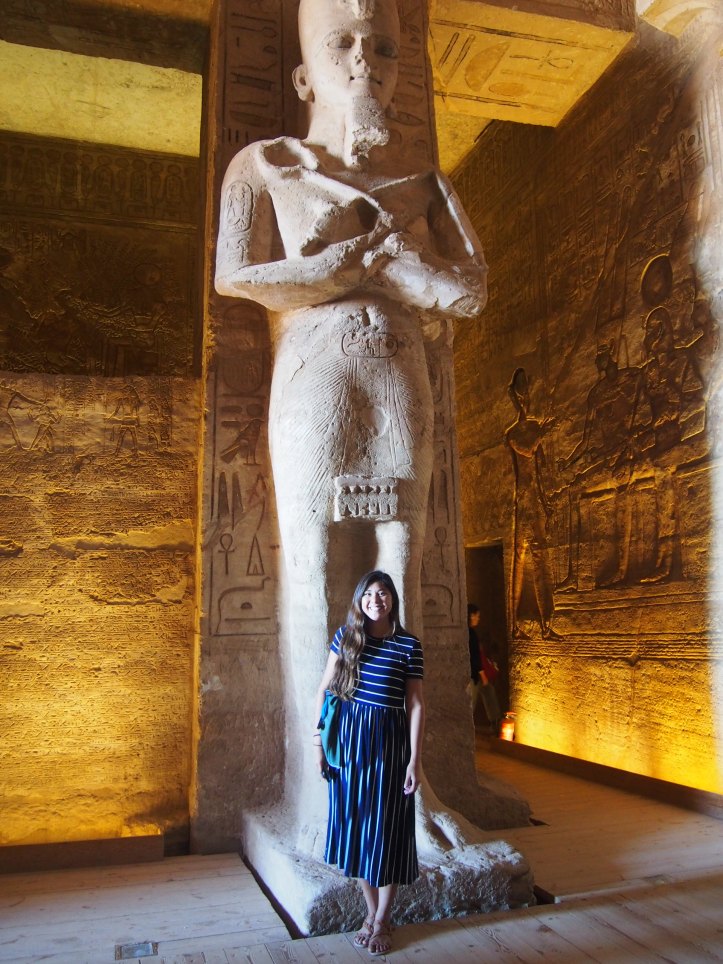 I loved Abu Simbel, it wasn’t overly crowded, but it was spectacularly beautiful and so worth the trek. It is a relatively small area and can be done within a few hours.  As we did with the whole Egypt trip, we had a tour guide which was incredible.  We learned so much about each place and learned about the specific rooms, the stories on the wall, and the history. I usually am not into this kind of thing, but I did truthfully enjoy learning about it all.

After the tour of Abu Simbel, the bus dropped us back off at the airport, where we caught a flight back to Aswan for the afternoon.  In Aswan we met another tourguide, who picked us up and brought us to to see the dam and then to another temple called Philae, located on an island. Philae was said to be one of the burying-places of Osiris, so it was held in high reverence. These temples also had to be moved due to the Aswan dam, as they were flooded several times.  The monuments were cleaned and measured by photogrammetry, a method that enables the reconstruction. The building was dismantled into 40,000 units and transported to the nearby island of Agilkia, where it now is located. 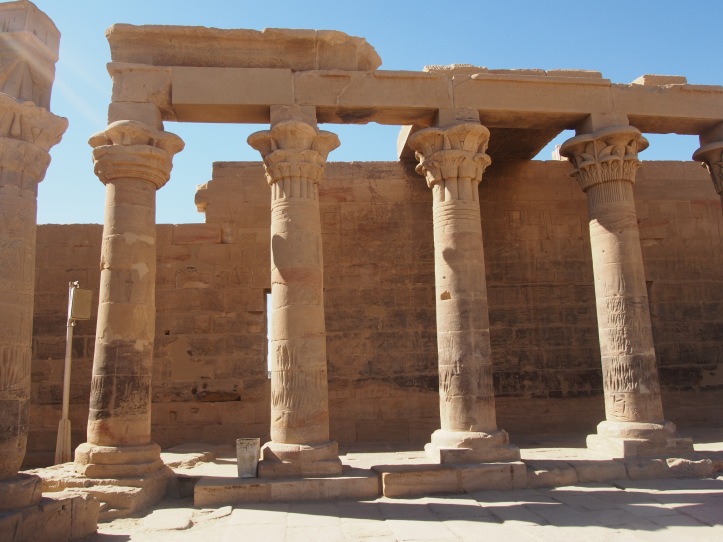 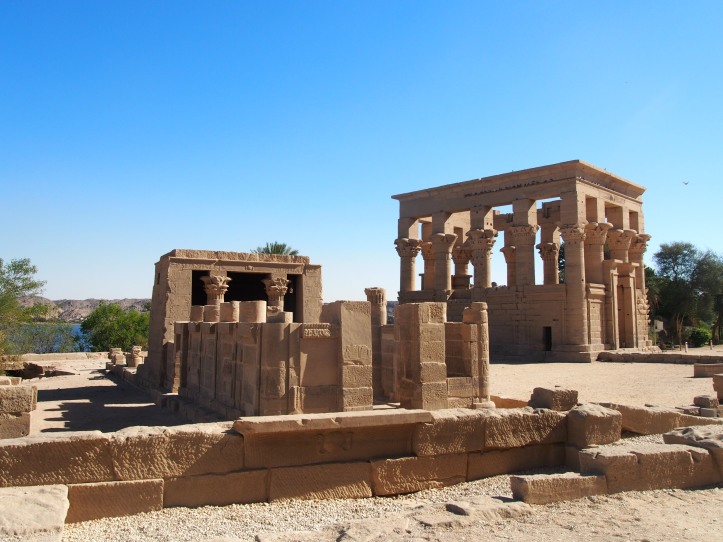 Next, we headed over to the unfinished obelisk, located in a quarry in Aswan. An obelisk is a four-sided tapered monument (like the Washington monument in DC).  This site is famous because it is home to the largest known ancient obelisk, being nearly 1/3 larger than any ancient Egyptian obelisk ever erected. This obelisk provides insights on how Egyptian stone workers might have carved stone from the rock.  It was believed that the female pharaoh Hatshepsut commissioned the obelisk more than 3,500 years ago. Stone balls were used to pound out imperfections until the surface was smooth, and many Dolerite balls were found on-site around the quarry. The methods of carving this massive obelisk was thought to have been by using wet wood.  Workers carved small cavities into the stone, and the slots were filled with wooded pieces, which were then soaked in water and the expansion of the wood would cause the carved rock to break free and crack the hard rock. It is unbelievable for me to imagine all of the work put into carving out a single obelisk from hard granite, but it made me appreciate seeing all of the intricate structures and imagining the years of hard work that went into building them.

Our next stop was lunch.  If you are ever in Aswan I highly recommend this restaurant, called El Dokka. What was unique about this, was that in required a boat to reach it. The transportation is free for customers, and it offers traditional Nubian or Egyptian food.  The views are spectacular and you can see remnants of ancient ruins. The islands along this part of the Nile are known as “cataracts”, and they are beautiful boulders.  At most of he restaurants we went to, the starter was fresh-baked flatbreads, served with moussaka, baba ghanoush, and tahini.  It was delicious but the overall experience is what made it spectacular.

After this, we made a quick stop at a local spice market, where we bought some delicious ground cinnamon. The colors and smells here were incredible, and they offered us hibiscus tea which I have come to love.

Lastly, was our “adventure” on a sleeping train from Aswan to Luxor.  I say this because Lynda complained the entire way, as Keith and I slept and relaxed. But yes, it was one of the more ‘adventurous” modes of transportation, but I wouldn’t necessarily advise against it.  The rooms are reserved with two people in them each, and they are quite small and have a little couch.  It really isn’t anything fancy, but it gets you from point A to B.  I can’t remember exactly how long it took, I want to say somewhere around four hours.  We needed help of one of the train drivers to figure out when to get off, but it wasn’t horrible.  In Luxor, we were picked up once again and brought to dinner before heading to the hotel for a good night’s sleep. We stayed at the Steigenberger Hotel, located right on the Nile. We went to bed as soon as possible, to prepare for an early morning hot air balloon ride.