I’m currently in a bus en route to Al Lith, where I will begin my 10 day research expedition in the Southern Red Sea. I’m excited to tell you all about the cool research going on, but first I wanted to explain the research trip I went on last week.

Royale is a PhD student in my lab at KAUST, and she’s one of the reasons why I first applied to the master’s program here. I first heard of KAUST through my friend Matt, who was on my study abroad trip in 2014 where we studied Marine Resource Management in Turks and Caicos. I saw an announcement on his Facebook about how he was going to graduate school in Saudi Arabia. I remember originally thinking “wow that’s crazy, my parents would never let me do that”. At the time when he announced it I was in Tanzania, and I remember my parents being worried about me, and I vaguely remember telling them “hey well my friends at school in Saudi Arabia- so at least I’m not there”. Obviously at that time I knew nothing about the country, I just knew there was some political unrest and gender inequality. Anyways, Matt ended up posting photos on Facebook of his time in the Red Sea, and I was blown away by the colors, biodiversity, and healthy reefs. This is when I first looked up KAUST, trying to learn a bit about it. I thought it was cool, but maybe too far from home, so I didn’t apply. Then about a year later I was working at Hawaii Institute of Marine Biology discussing with the faculty here if I should further my degree. Basically, by the end of my conversations I was convinced that grad school was not a bad idea. This is when I remembered KAUST, and wanted to apply for an internship to see what it was like. Low and behold, I found the PERFECT internship for me, studying whale sharks! When I applied, i had only swam with them once, but it was a life changing experience and I was hooked. I needed to get back in the water with them. So anyways, I thought this was meant to be- the opportunity of a lifetime, tagging, and studying whale sharks in the Red Sea. So I got my application together and sent it in. A few weeks later I was contacted Royale, who was the leader of this project. I was stoked that she even wanted to talk to me. But it turned out we had a very weirdly similar background. She is from Pennsylvania and went to school in Maine. She studied abroad in a Tanzania, and had past jobs doing marine biology outreach. And she asked me if I would be able to come down to Saudi in March for the start of whale shark season. I was devastated that my current job didn’t end until August, so that definitely wouldn’t work out. But nonetheless she got me in contact with her advisor, Mike Berumen, and they both urged me to apply for a Master’s. I excitedly applied and now almost two years later I’m still here and loving it!

Anyways, it was Royale and her whale shark project that attracted me to KAUST in the first place. Last year, she invited me to help out with her research, and of course I excitedly said yes! I was lucky enough that I had already seen whale sharks that year while I was doing research in Al Lith on another project. But it was a slow year. I was in Al Lith with Royale for maybe five days, and we didn’t see a single whale shark. It’s hard to study an aggregation when they disappear like that! Apparently, the previous year (that I was supposed to be her intern) she only saw a single shark during the whole season. So now we are in this year, and she sent yet another email asking for help on her research. Of course, despite seeing none last year, I agreed to go down for 6 days. We talked about going and surveying turtle nesting islands in case we see no whale sharks.

Luckily, day one on the boat was a massive success, we saw seven whale sharks that day. I’m pretty sure it was a new record. My job for the first few days was jumping in the water first, chasing the whale sharks to get photo ID shots. Then I shout at the boat any information I can get- the size, tagged or untagged, and the gender. If it’s a new shark (untagged) Royale and a research assistant, Amr, get in the water for tagging and tissue sample. Both are done with a sling spear. We monitor their behavior (if they’re diving, if they’re eating, etc.) and sometimes take a plankton tow to collect a sample to see what they’re eating. 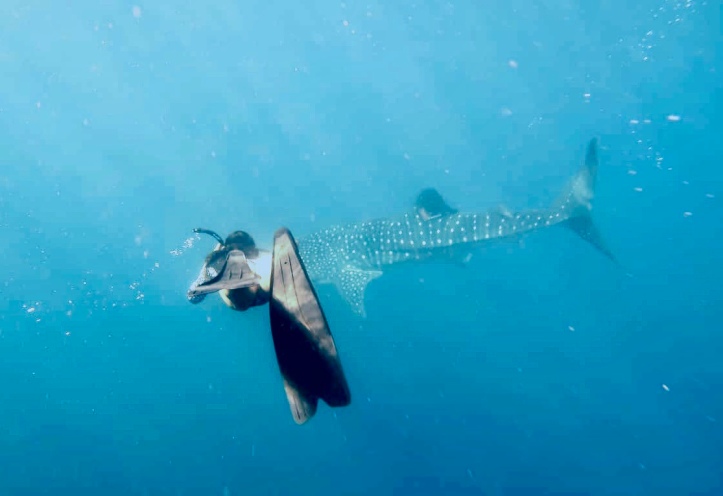 During lunch, we tried to go out to different islands to anchor and do turtle nesting surveys for my project. Amr would fly the drones, looking for turtle tracks. I would be walking down the beaches, measuring different parameters (temperature, moisture, light, beach slope) and collecting sand samples and looking for nesting evidence. The first three days we went to two different beaches of Abu Lott, a huge island with tons of sandy beaches. We didn’t find any nesting activity, but I think that’s because when I dug to 50 cm (nesting depth) the hole was inundated by water. Meaning it’s unsuitable for nesting. The last two days we went further out to sea, and I surveyed two islands with tons of nesting evidence. On the last day I counted 15 turtle corpses, and collected bones for future analysis. It was pretty epic, with the drones, I set a flight path, and I was able to capture tons of turtle tracks and nests, which I’m excited to incorporate into my PhD. And we also saw lots of turtles swimming in the drone footage, which is pretty darn cool!

Back to whale sharks, on day two, we left the marina at around 7:30, and by 7:40 we were in the water, surrounded by three whale sharks feeding together. We spent the whole morning with them. Sometimes they would dive deep and then we would use the drone to find them, and boat back to them and hop back into the water for more. By the end, I’m pretty sure they were all photographed, tagged, and biopsied, success! 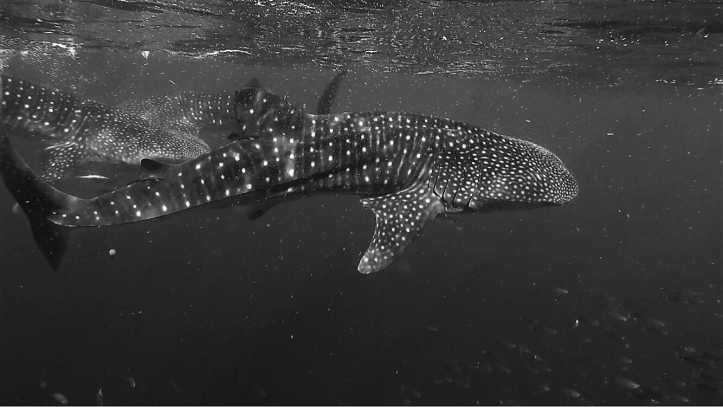 During my 6 days in Al Lith, we only had one day without seeing any whale sharks. But we found success nonetheless. We looked in the morning for the sharks using the drones and boating up and down where we usually see them. During lunch we used the net to catch sting rays for another project in my lab. I was able to catch a ray with a net while I was snorkeling! We brought the rays on the boat for photo ID, measurements, DNA tissue sample, and a swab of mucus (more DNA), then put them back in the sea. 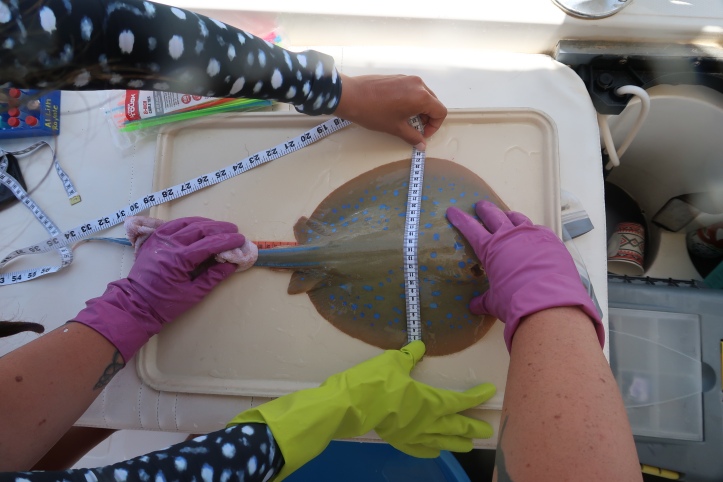 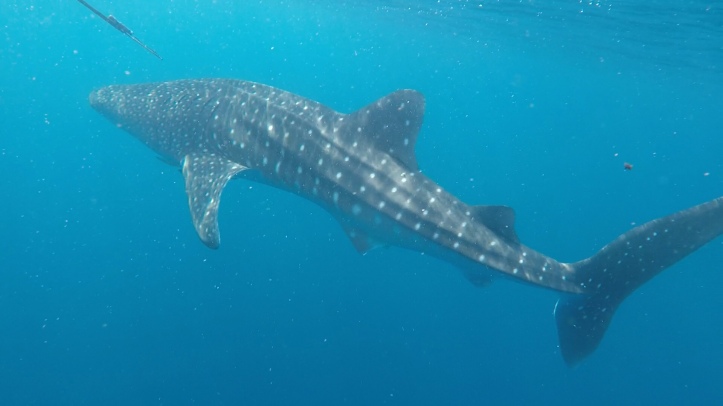 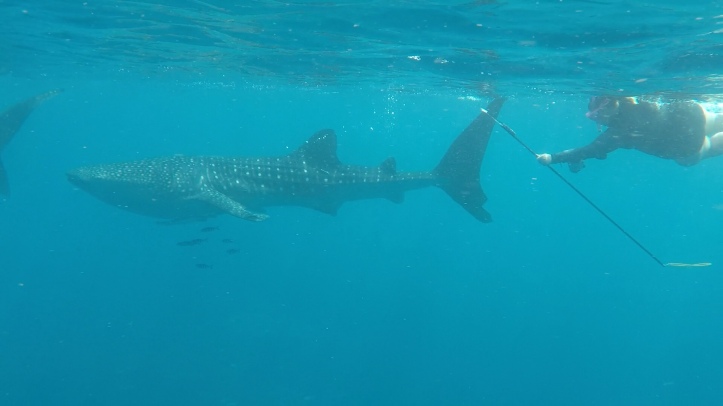 That same day, we headed to a lagoon that we often see manta rays in. And lucky for us, we saw two beautiful mantas feeding. Royale had an idea to try to collect mucus so we can get a DNA sampling without having to get blood/muscle. So we attached a toothbrush to the end of a spear to try and scrub down the mantas from a boat. You can imagine it was quite a sight, but it was successful! We were also able to get some nice drone footage of the mantas swimming.

Another highlight of me was when we were out on the nesting island, measuring turtle tracks and nests. Then we looked out along the shore and saw tiny black tip reef sharks swimming all around. Then further past the reef we saw a pod of like 50 dolphins. Moments like this I can’t even describe but I promise you I knew that in life, I was exactly where I needed to be. My pure and happy place in the world, on this little island, trying to learn more about turtles and enjoying the wildlife that calls this island home. It was incredible. Also- one day we came across a deceased reef shark on one of the islands. So as marine biologists do, we took it back to the boat for dissection to try to find out why it died. We cut it apart and collected samples of the organs. It was gross but super cool!

On the last day, we were headed back in from the offshore island, and found yet another beautiful whale shark. I jumped in, and it turned out to be a new shark. He was a bit beat up, with cut caudal and dorsal fins, looking like he’d been hit by a boat in the past. He stayed close, and circled me, as to check me out. I feel like I was in there forever, right next to this massive, beautiful, harmless creature. My whole soul felt incredibly happy. I told the boat it was a new juvenile male, and Amr and Royale jumped in and tagged and biopsied it. It was super fast and efficient. We even had time to go back into the lagoon to look for mantas. It was our last day, so I wanted to say goodbye to our new friends. As expected, they were there feeding on the plankton rich runoff water from the prawn farms. But we lucked out to get to see the rare humpback dolphins, swimming in the same small lagoon. As we were trying to get a closer look at the dolphins, we came across a large school of cownose rays. I love seeing these. According to literature they’re not even living in the Red Sea, so it’s cool to see them. We were surrounded by amazing animals and I felt so happy that my life has lead me to where I am, conducting research to help protect animals I care so much about. And I think I really needed that reminder, that I’m exactly where I need to be.

There was an error retrieving images from Instagram. An attempt will be remade in a few minutes.