Day one in Antalya, Turkey

This country has been on my radar for quite some time, after seeing images of the dreamy Cappadocia villages with the beautiful hot air balloons. I even looked into planning a trip last year but then opted for another trip instead. Anyways, I had very little knowledge of Turkey, and had no idea how underrated it was.

Let’s go back in time to a week ago. I was working on a paper I’m writing and was a bit stressed, and didn’t really have time to book a trip. In KAUST, we have two major vacations a year, called Eid. Eid is a Muslim holiday, and the dates of this change every year. But there’s two a year and we have a week off of school for each. Not everyone leaves for Eid, and some people stay on campus to accumulate vacation time to take off one big trip. I wasn’t sure of my plan, since I’m going to be off campus for a month and a half. In July I head to Malaysia for Eid travels with David, followed by a conference and then research at university of Malaysia to work on turtles. Anyways, my best friend at KAUST is leaving in the beginning of June, so we decided to take a trip out of KAUST. We hopped on skyscanner.com and tried to find the cheapest flights. We originally decided on Sri Lanka. I made an itinerary of what I wanted to do and how to get there, even emailing tour companies. Then we found out how unsafe it is at the moment. Usually I’m pretty open to going anywhere, but unfortunately at the moment there’s a curfew, they have apparently banned social media apps, and closed down some tourist attractions. Thus, to our disappointment, we weren’t able to go there. So here we were, three days before Eid, sitting in the library searching for the cheapest flights to anywhere. The list of countries included Egypt, Oman, Lebanon, Qatar, Iran, Pakistan, UAE, and Turkey. We wanted to go to a place neither of us have been before, so we chose between Qatar, Iran, Pakistan, and Turkey. We then narrowed it down by ensuring that it was somewhat safe, had beautiful nature, and had alcohol. So that is how we chose turkey. But, George wasn’t very keen on spending time in Istanbul (which I agree- cities aren’t my thing). So we did a quick search and found the coastal town on Antalya, located on the “Turquoise Coast” and found that it looked beautiful. So three days before our holiday we booked tickets and started researching things to do. I’m not normally a last minute kind of traveler but honestly I’d rather book something last minute than nothing at all.

Anyways, since it was a campus wide holiday KAUST was offering free bus shuttles to the airport which was fabulous cause yay saving money. The airport was a tad crazy since everyone was leaving for Eid, but it was fine since I have access to the lounge (thanks mom) and we got a bunch of free food and could chill there for a few hours while we waited. We both took a little nap as well.1 Our layover was in Istanbul was around 5 hours. And the line for passport control was super long, taking about an hour so I am super glad we didn’t have a flight to rush to. The flight from Jeddah to Istanbul was less than four hours, than our flight from Istanbul to antalya was about 1.5 hours.

There is very limited info online about public transport in Antalya, so we truly just winged it. Asking people for help along the way. Our first impressions were that the locals were a bit annoyed by our questions and very few spoke English. But fortunately we found an amazing gal who ended up using her transport card (we didn’t have one) and that allowed us to get on the tram. That was super kind of her. The tram took around 40 minutes to get into the city. We were staying in “old city” called Kaleci in a hostel called Kudu Beergarden. We got off the tram at “Ismetpasa” where we had a 15 minute walk to the hostel. Our initial impressions were that the city felt very quaint and European. I was super happy that we were staying in the old city since it was super cute and reminded me of the streets of Greece. The roads in this area didn’t have cars so it was easy to navigate on foot, and there were beautiful buildings and narrow cobblestone paths. On our walk to the hostel we passed ancient ruins called “Hadrian’s Gate”, which was beautiful. Our hostel was apparently pretty new, but it was very clean, decorated very nice, and in a perfect location. 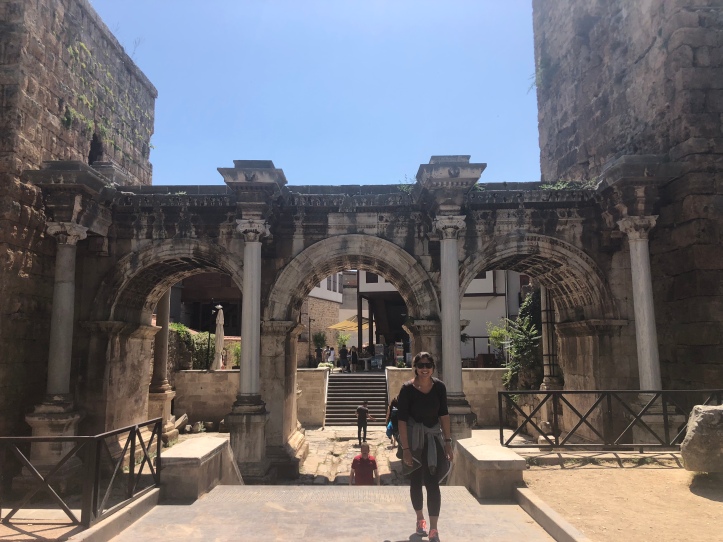 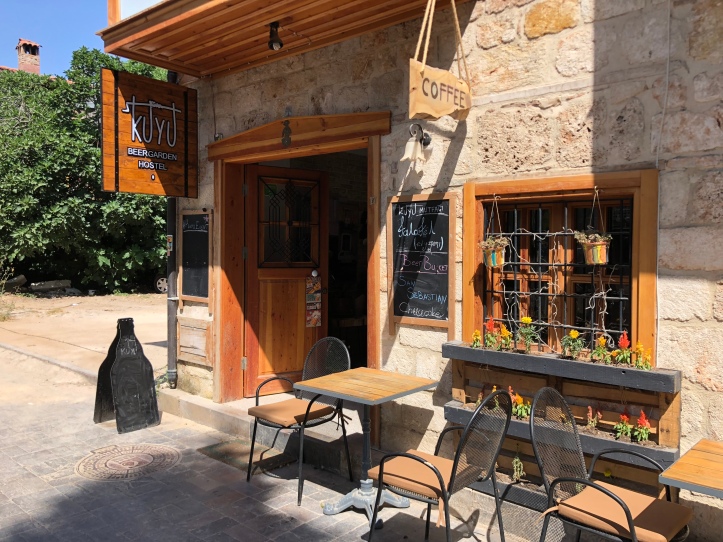 The only downside was that the owner was away and the brother spoke no English. We checked in, our our things down, and then set off to explore the old city. We walked around, window shopping and looking for a place to eat a late lunch. We eventually found this adorable restaurant that had veggie options. There were seats along the road, inside the restaurant, and in the back garden. We opted for the back area and it was so beautiful with vines and trees everywhere, and a stage. We were the only ones back there but a performer went on stage anyway and sang us a bunch of Turkish songs. We enjoyed some cocktails and shared laughs. We were very impressed that they had a veggie section on the menu. We both ordered veggie burgers which were delicious, and since it was pretty late and we had a day with not much food, we devoured our lunch and also got pretty tipsy from our drinks. The food in Turkey was super reasonably priced. It was delicious and great quality, and our meals with drinks were never more than 100 lira total between the two of us ($17). 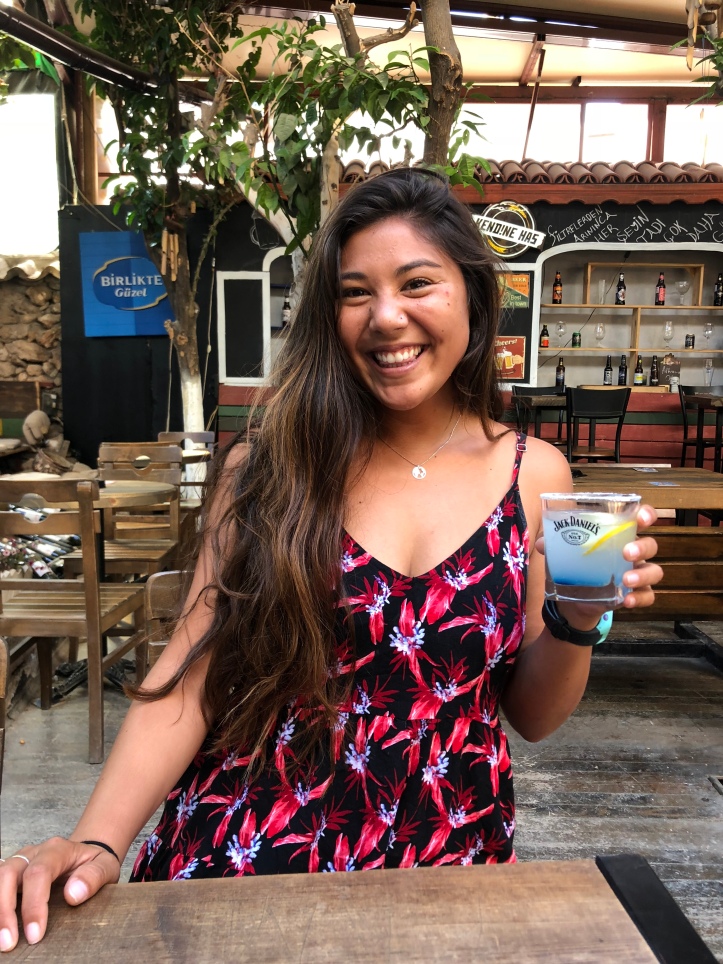 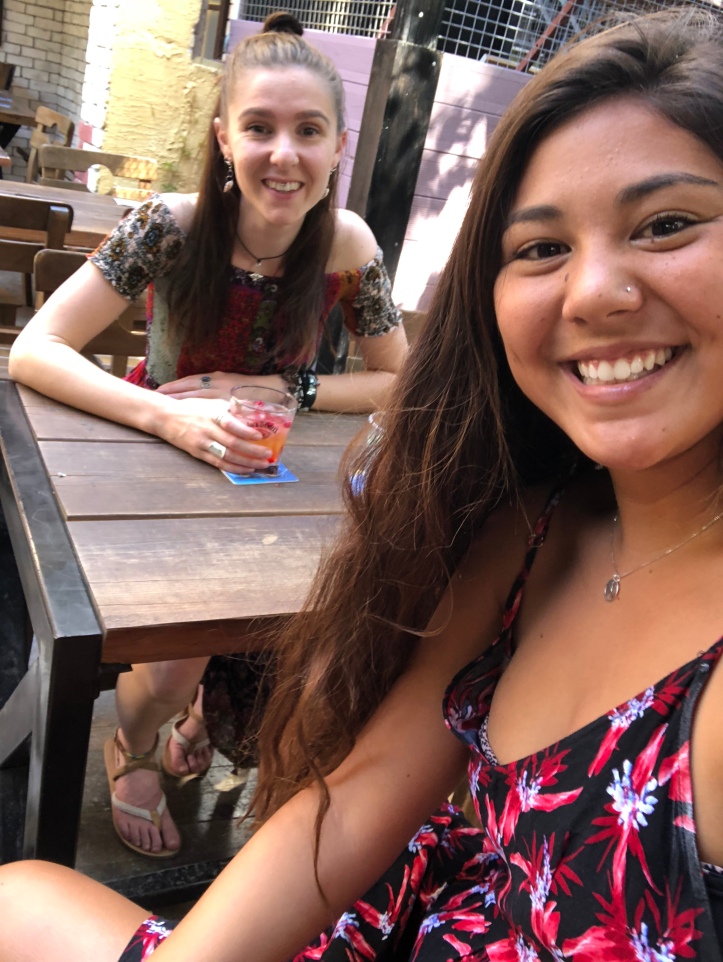 After lunch, we continued walking around old town, and eventually came across the harbor. The views here were absolutely breathtaking, with a steep cliff behind the harbor. The water was crystal clear and blue, and there were brightly colored flowers. George got an ice cream, which we realized was a unique Turkish ice cream I’ve seen on a Facebook post before. It’s hard to explain but the ice cream is a bit stretchy and sticky and delicious. 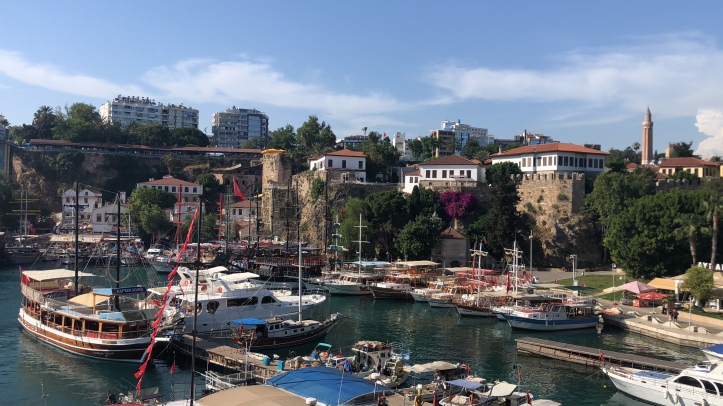 We walked around the harbor trying to find a boat to take us out to a famous waterfall called LoWer Duden. Unfortunately, we were told that the boats only go out at 1:00 for this trip and our only option was to get a private boat which was pretty pricey. We decided to try again with the boat on the following day. Next, we found a road that lead back up with little shops lining the way. The men at the stores were a bit aggressive but we did some window shopping. There were lots of beautiful Turkish towels and mosaics. I’m excited to one day have a house and be able to furnish it with things I get on my travels. On this road we came across a beautiful old mosque and a museum. Once we reached the top there were several viewpoints where you could see the whole village and the sea. This was pretty close to the city center, and we found a tourist information booth and asked several questions about how to get around to some waterfalls, since our hostel didn’t speak much English. The girl here was super helpful, and wrote down some bus info for the next day, and recommended that we experienced a Turkish bath. The walk home from the city center was about 20 minutes. But we stopped by the old bazaar and some small shops on our way. We passed by the hadrians gate again, and found our way to our hostel. 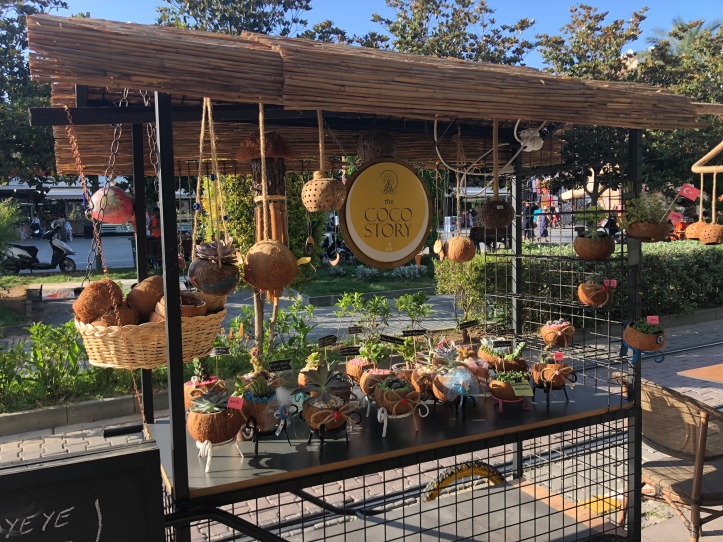 At our hostel we changed into our bathing suits and googled nearby Turkish baths, called a Hammam. There was one only a few minutes walk away. There were several options here, such as just the cost to sit in the Turkish bath (like a sauna), or you could get a soap massage or a body scrub. Since it was our first experience we opted for just the Turkish bath, and decided if we enjoyed it we would do a massage or scrub afterwards. The whole ordeal was prettY strange. I’m glad we experienced it nonetheless. Ok the first floor there were a bunch of changing rooms where you wrap yourself in a towel and put on some clogs. Then we went downstairs and were lead into the baths section. We had the room to ourselves. All the floors and ceiling were made of white granite, and in the center was a heated stone to lay down on. It was almost unbearably warm for me to sit on, so I laid my towel on it. Within minutes I was dripping sweat. Fortunately I brought my water because I knew I’d get dehydrated. All along the walls are little basins with two faucets. One with cold water and one with hot water. I filled up a basin with freezing cold water, and next to it was a little bucket I used to pour the water all over my body to cool me off. I switched off between laying on the hot rock and throwing freezing water on myself. It was a humorous, and slightly painful experience. We stayed inside for about 45 minutes until we decided we needed fresh air. We went into our changing room where there were little beds and we laid down chatting for another 30 minutes. Our bodies were feeling pretty nice and relaxed after the sauna so we just wanted to chill out for a bit. But the time we were done it was about 8:30, and we decided to walk around the shops and get a small dinner. We walked the streets of old town, admiring the colorful rug stores and locally made handicrafts. We looked at some of the jewelry stores and were keeping an eye out for vegetarian food. Eventually we came across a cute little cafe. We got sangria, lemonade, and a vegetarian taco. The atmosphere was incredible, with garden seating and really nice decorations. The food wasn’t incredible but it was fine, and cheap, and we loved the owner she was very sweet. After dinner we headed back to the hostel and confirmed the bus stops (communicating with google translate). Then we showered and passed out after such a long day of travel and exploring. We set our alarm for 5:45 the next day and had a wonderful nights sleep.