We woke up around 7:30 to get ourselves ready for the day. We packed things for a hike and for the beach, and had our free breakfast at the guest house. The view was absolutely amazing, the food was not that amazing but it was free so it’s fine.

We walked about 15 minutes to a smaller bus station. This city had different vibes than Antalya, as it was smaller and more quaint. To get to the bus station we walked next to the marina for a bit, than a super cute market. It was closed since we were there early, so we agreed to check it out when we returned. We waited at the bus stop and sat and waited for a bus that said “Kayaköy”. This little town has a ghost town, and is also the start of a hike we wanted to do.

The bus was super cheap and not too long, and eventually we found our stop, got off, and found ourselves in this very quiet village. There were some super cute small shops along the road. We both bought a few small souvenirs and then quickly found the hundreds and hundreds of abandoned buildings comprising this ghost town. Apparently Kayaköy used to be a bustling city of both Turkish and Greek inhabitants until 1920. Both Muslims and Christians lived here in harmony, making it a unique place. But in 1923, the Turkish-Greek war came to an end, and everyone was forced to move to ensure that each country only had one main religion.

The ghost town was built upon a hill, and we had read online that there was a hike that goes on top of a mountain and then down to Ölüdeniz, a nearby village. We used Maps.Me to find the trail, since it wasn’t very clear at the start. The trail through the ghost town was amazing. There were very few people, and tons and tons of these abandoned buildings.

We walked up to the top of the mountain, taking maybe about 20. It was hard to find the path but we figured it out eventually. Once we reached the top we had an incredible view of the ocean. It looked just like greece, with a vivid blue coastline and rocky steep shore. The forest also was beautiful, full of pine, fig, and pomegranate trees. After living in saudi for so long I really appreciate lush sceneries and just being outside in the fresh air. 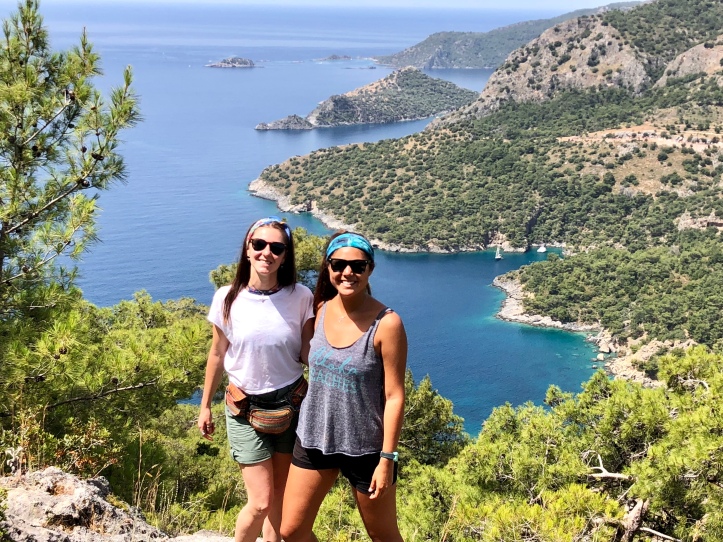 The hike took a few hours, but I would 100 percent recommend it. It was so beautiful the whole way, and wasn’t too difficult. We made it to Ölüdeniz at about noon, and took a quick walk around. It was more touristy than I anticipated, with lots of British restaurants and souvenirs shops. I also quickly noticed that this was a world famous paragliding destination, with tons of them in the sky. There were also lots of stands with information, and I found out it was relatively cheap (around $100) which is way cheaper than skydiving. I found out that it only takes about two hours total, and they take you in a fan to the top of the mountain (6500 ft in elevation). I decided I might as well do it while I was there, and signed up for a 2:30 departure. We found a restaurant that had some delicious cocktails, and we both ordered vegetarian burritos. 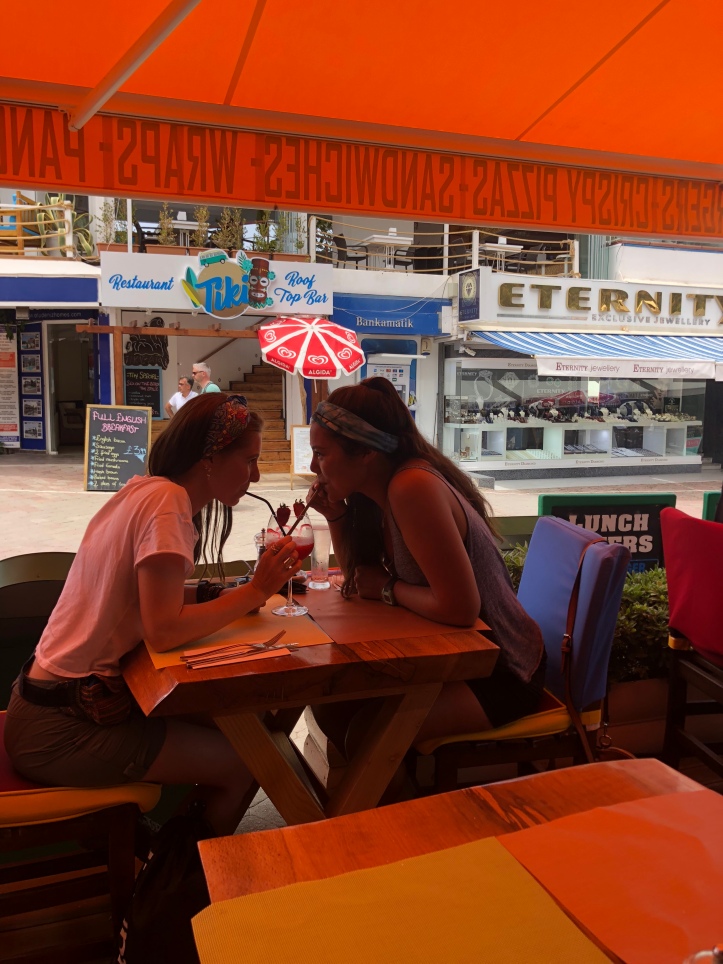 After lunch, I left to go paragliding while George walked around Ölüdeniz and hung out. The paragliding experience was out of this world incredible. I have never done it before, and was a bit nervous, but as soon as we took off I had a blast. My instructor was super kind, and was getting a kick out of my singing and screaming with joy. The total ride down was over 30 minutes, and it was super nice to take our time and enjoy the views. The mountains were spectacular, and the ocean view was the highlight. I liked it way more than skydiving because it was much slower, I felt like I was flying. 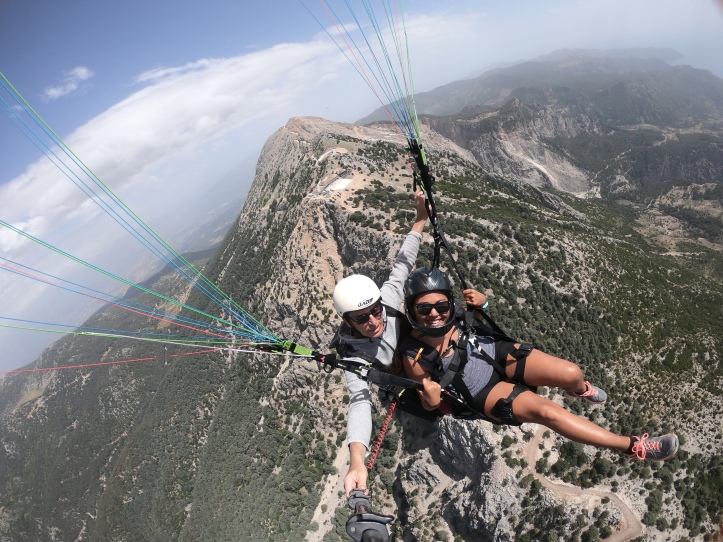 I even got to steer us, and he told me I should get certified to paraglide solo. I think that’s too much responsibility and enjoys having him doing all the work. It was a blast. Even the landing was so much smoother than I anticipated. It was so worth the money and I’m so glad I did it.

After returning to oludeniz, I found George and we went to the beach to sun tan and go for a swim. The ocean was way colder than I thought it’d be, since it was so warm outside. But it was super refreshing nonetheless. We ate our leftover lunch and then found a bus back to Fethiye. The bus was about 20 minutes and again super cheap. When we got to Fethiye there were a few things I wanted to see before it got dark, this included the ruins to a castle as well as the Lycian tombs. The tombs were only a 10 minute walk from the bus station, and they were super beautiful. We didn’t want to pay to go in them, but we could see them from the road. The tombs were build in 350 BC by the Lycians. 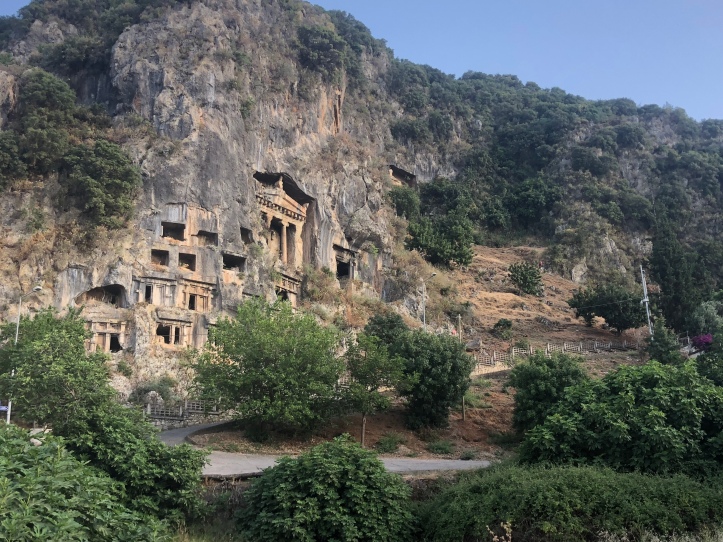 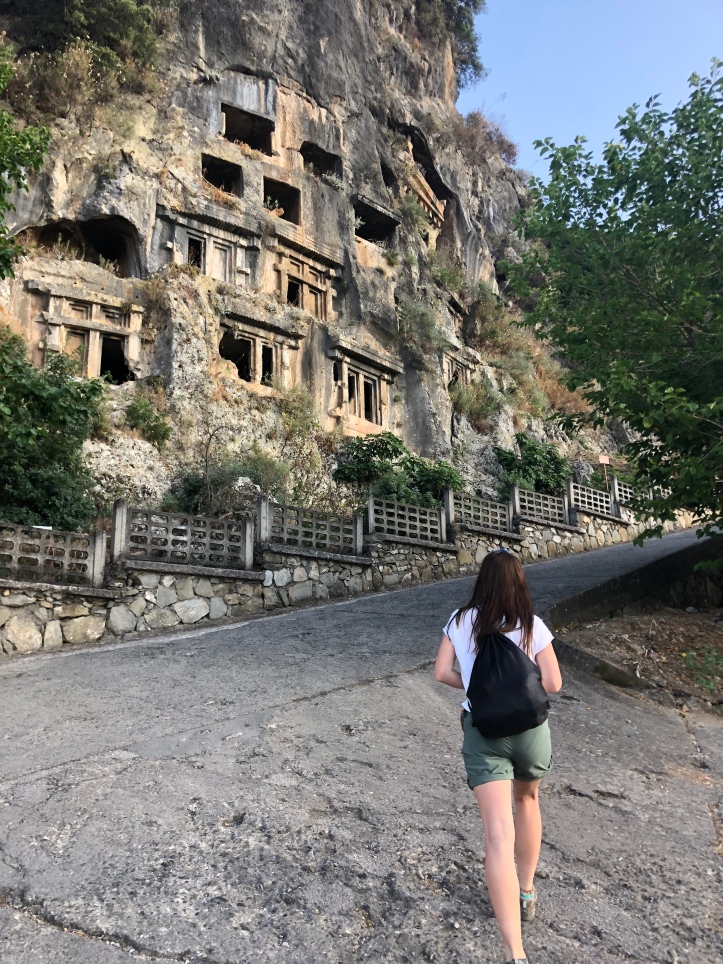 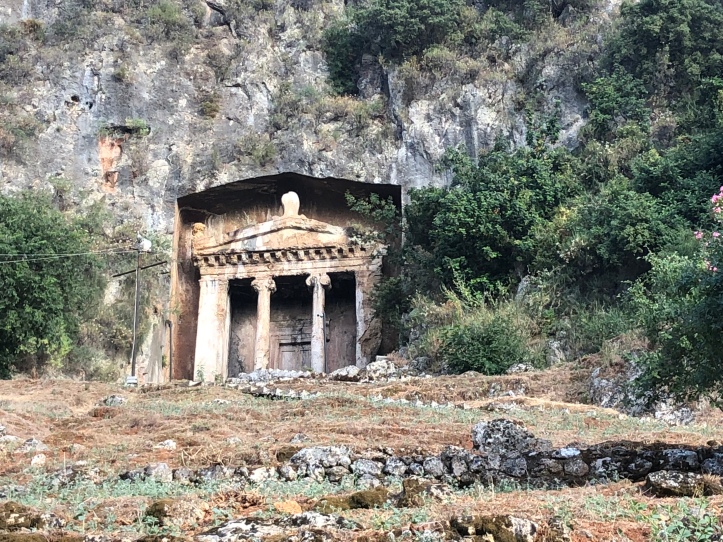 After the tombs we talked to the castle, where there was a little trial down the hillside to the main roads. The viewpoint of Fethiye was wonderful, and we even found a little tortoise! 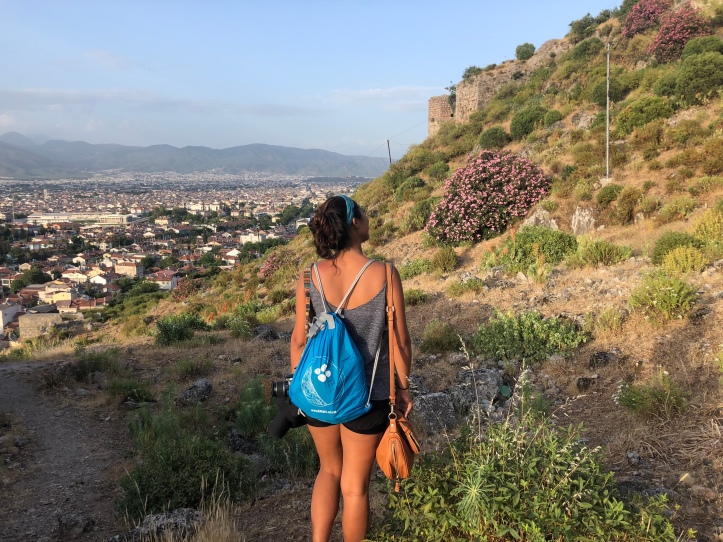 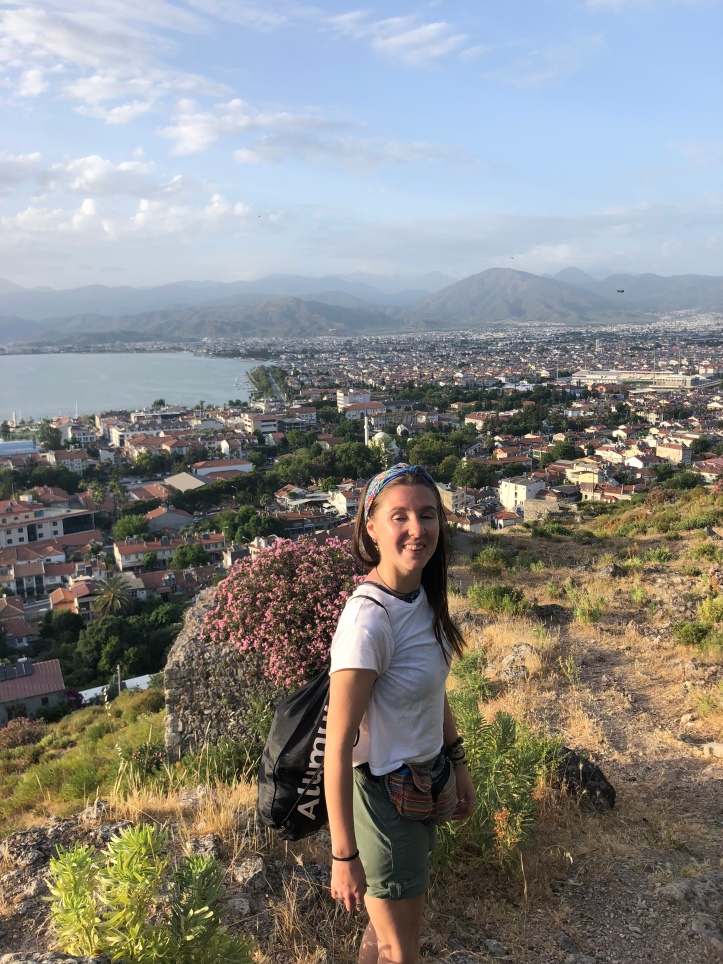 We headed back to our hostel to change and look up good vegetarian places to eat, and then headed out to shop in the cute marketplace. We found tons of beautiful souvenirs and George stocked up on Turkish towels. 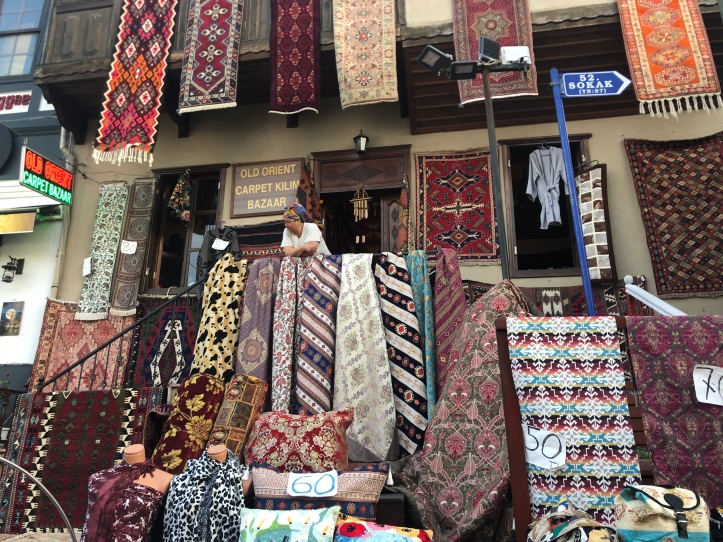 The restaurant where we had dinner was called Mozaik. They had tons of delicious vegetarian food, and was georges favorite meal of the whole trip. It was a really nice ambiance and pretty reasonably priced, and the portion size was very generous. 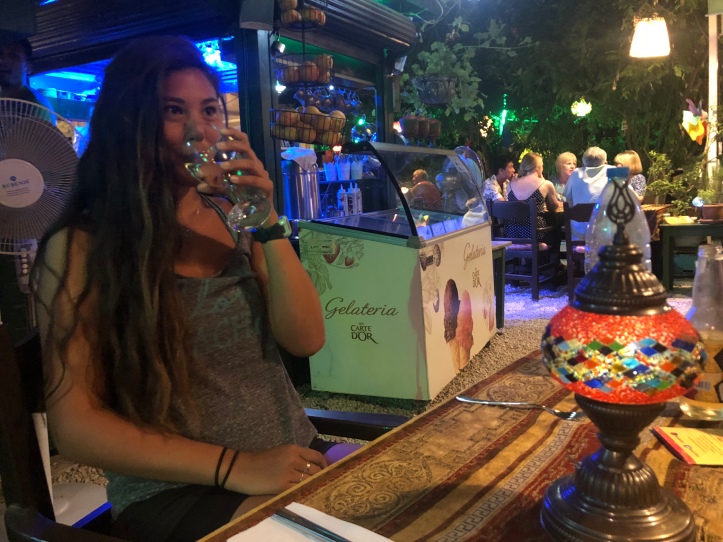 After dinner we arranged a boat tour for the following day out of Ölüdeniz. We went to bed after a long day of hiking and adventuring. It was a lovely day!