(better late than never? This post was from my trip to Miri, Malaysia back in July)

Hi from Borneo! I feel like I’ve done so much here already, and each day has been so jam-packed that I haven’t had much time to write about what we have done. To start off, David and I are in Malaysia because I received a travel grant to go to a conference on Conservation Biology, which takes place in Kuala Lumpur. But while in Malaysia thought it would be worthwhile to check out Borneo since I’ve heard so many great things about it. In addition, after the conference, I’ll be going to the University of Malaysia’s turtle field station to get some first-hand experience with turtle fieldwork, since there are no turtle experts at KAUST. I’ll be there for a total of a month with no internet and no electricity, so should be quite an experience.

Our first stop in Borneo was a little-known city called Miri. It is not touristy at all but in recent years their diving sites have gained popularity. There was only one dive company, called Coco Divers. We stayed at their hotel for three nights and had two days of diving. Our traveling day was quite long, and we arrived in Miri at around 1:30 PM after losing a night’s sleep. At the airport, I bought a SIM card for 40 RM ($11) to last me a month, which is pretty cheap. I highly suggest doing this because you can use the “Grab” app to get around, and the prices are dirt cheap. Life example, our ride from the airport to the hotel was just 17 RM ($4.50). We checked in and changed our clothes and started walking around. We first went to a handicraft bazaar that sold local goods and handmade souvenirs. The city isn’t really ideal for walking around and there weren’t many sidewalks but we managed. Our next stop/highlight was Lemongrass Reflexology and Spa. Oh my god, this place was heaven. It was a semi-upscale spa that offered different massages. We made sure to visit every single night (they didn’t close until midnight). The first night we got an hour Thai massage. The prices are a bit more than Thailand or Bali but $16 for an hour was way better than it would cost at home.

After our amazing relaxing massage we decided to walk to the Central Park. It was awesome to see so many locals running and exercising here. It was pretty but only took us a half hour to see. Then we googled vegetarian restaurants in Miri and found a place called “Qing Xiang Vegetarian” located at Boulevard. This restaurant was so freaking good, the menu was massive and all the food was vegetarian. I was a bit confused when I saw things like fish, chicken, beef, and shrimp on the menu, and was skeptical of their definition of vegetarian. But I walked to the waitress and she assured me it’s made from soy and vegetables. We ordered something called the “sizzling plate” and “crispy chicken and rice” and we devoured it.

Afterward we went to get dessert so we walked around the food stalls for a bit and found a place that served ice cream. David got Durian flavored which surprisingly not as bad as I thought it would be. If you haven’t heard of durian it’s a fruit that is popular in Asia, with a very strong pungent stinky foot odor. In fact in our hotel rooms there signs up that say “no durian” because that’s how bad it smells. We got a Grab home, again it was surprisingly cheap. Then we watched an episode of Stranger Things and then went to bed. Unfortunately, I had a lot of jet lag so I didn’t sleep too well.

In the morning we woke up around 6 am to have breakfast at the hotel and then we were picked up by the dive company. The next two days we did full days of diving (three dives per day). Miri has very little tourism and isn’t as well known for diving as the east coast of Borneo (like Sipadan and Mabul), but I really wanted to do some diving with David and the flights worked out for Miri. We booked both diving and accommodations with CoCo Divers, which I am pretty sure is the only dive company in Miri.  The hostel was nice, we got a private room which was clean and perfect for us.

There is not a lot of info online on the diving in Miri, so I didn’t know what to expect. I was pleasantly surprised about how good the diving was. We saw so much on the first day alone. The diving was very different than the Red Sea so it was a really nice change of scenes. One of the biggest differences was the abundance and diversity of anemones and anemone fish. They are so colorful and beautiful, and sometimes you can find these beautiful clear shrimp that live on them, or even a unique species of crab. I brought my fancy Olympus underwater camera with me so I was able to take some nice underwater photos. On our first dive we were at a site called North Sawa. On this dive we saw an octopus, tons of nudibranch, and even cuttlefish! I really enjoyed keeping an eye out for tiny nudibranch on this dive, since in the Red Sea they aren’t super abundant. Our second dive was at a site called “Nemo City”, which as the name suggests had tons of anemones and clownfishes. It was beautiful I hope I got a photo that shows the abundance and diversity. My personal highlight of the day was a super beautiful and chill green sea turtle that we came across. It wasn’t scared at all of us and was hanging out for a bit. We also saw some bigger fish like a barracuda and trevally. We had lunch on the boat in between the dives. As always I requested vegetarian and I was super happy with the delicious homemade meal I got. It was rice and eggs and a really yummy local fern. The last dive was at a site called Hatanaro point. The current was getting a bit stronger at this site but it still was okay. We saw a beautiful huge jelly fish when we jumped in. We also saw tons of fish and nudibranchs. After diving we headed home to change clothes before going straight to Lemongrass for another massage. Wowow was it amazing, seriously one of the best massage places I’ve ever been. It’s lovely.

After each day of diving, we got massages and explored the city of Miri (did I mentioned we saw literally no other tourists). Every evening we ate at our incredible vegetarian restaurant followed by ice cream, it was definitely a nice routine. Here are some of the parks and temples we saw in Miri!

As I might have mentioned we spent four nights in Miri. The first night was the afternoon that we arrived, the next two days were spent diving, and since you can’t fly within 24 hours from diving, we had one free day in Miri.  We decided to go to the amazing Lambir Hills for a day of hiking, before making it back to our flight by the evening. “Lambir Hills National Park is probably the world’s most complex and diverse forest ecosystem. Its 6,952 hectares of lowland dipterocarp and heath forests rise to a height of 450m and produce the greatest known level of plant biodiversity on the planet. This provides a home for 237 different species of birds, flying squirrels, wild pigs, gibbons, many different types of monkey, various species of deer, and untold insects and other invertebrates, as well as dozens of international research scientists who are permanently stationed in the park. Lambir also offers fascinating trekking trails leading to sparkling waterfalls and bathing pools scattered about the rainforest, all within 40 minutes drive of downtown Miri.”  So obviously form this description we were so stoked to experience this trek, and oh my goodness it was fabulous.  We got there super early, literally, we were waiting in front of the ticket stand for them to open, and we chose our route based on the advice from the ranger. It was pretty hot and humid, so we packed tons of waters, snacks, and lunch, and were on our way.  We did some jungle trekking to less-visited waterfalls, and for the first four hours of our day, we actually didn’t see a single person. On hikes like this I am super grateful for having a travel buddy, since I am not sure how safe it would be to hike alone.  We were bummed that we didn’t see much wildlife, but we heard so many birds and also really appreciated all the diversity with plants and bugs.  It was such a beautiful hike, I really do recommend it! 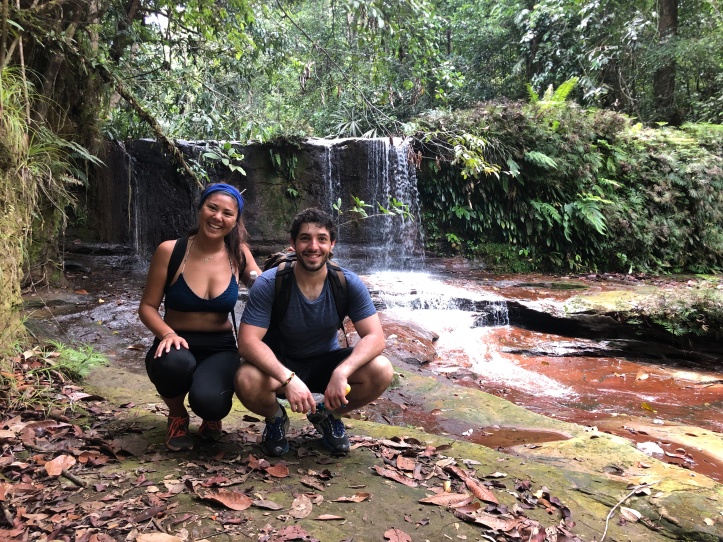 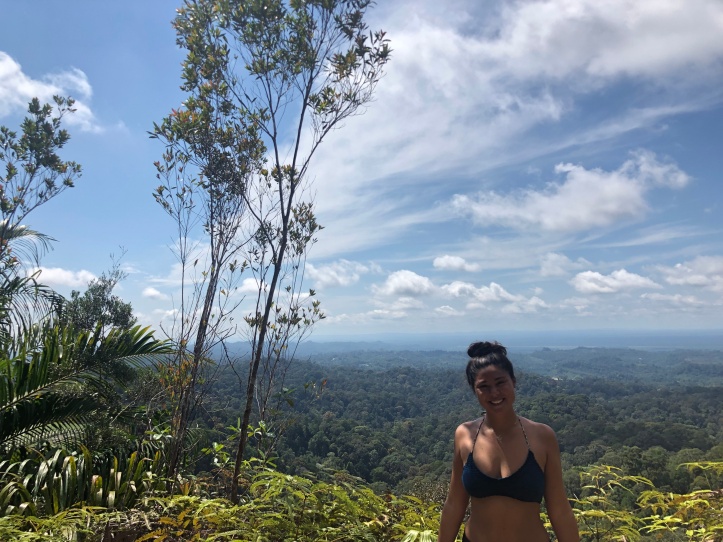 There are so many trail options, but we did a combo of waterfalls and the lookout from the top of the hill.  it was actually pretty tiring and sweaty but if you go slow the views are well worth it- it was such a lovely day.